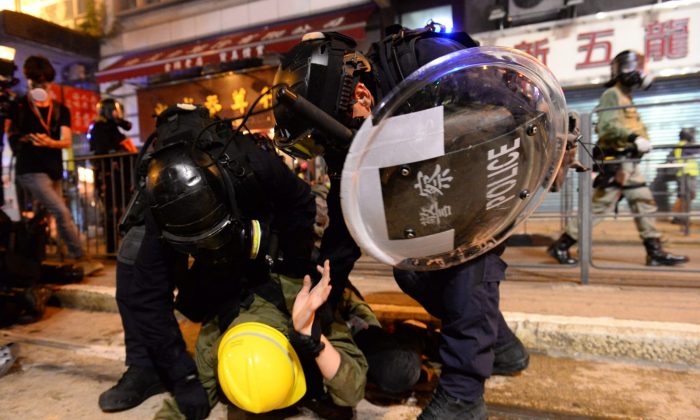 Hongkongers took to the streets on July 28 for the second consecutive day of protests in defiance of police objections. Clashes between protesters and police once again resulted in injuries, as officers cleared crowds by firing tear gas, rubber bullets, and sponge grenades.

Public anger has been mounting following the police’s delayed response to a violent mob attack that occurred inside a metro station last weekend.

On July 21, men in white shirts—whom police later confirmed had triad backgrounds—stormed the Yuen Long metro station in northwestern Hong Kong and indiscriminately attacked passengers with sticks, clubs, and poles. Many passengers were returning home after participating in a march against a Beijing-backed extradition bill held earlier in the day. The attack left at least 45 injured. The police did not arrive on the scene until about an hour later.

Six days later, on July 27, scores of protesters converged in Yuen Long to demonstrate against the attacks and what they perceived as police–triad collusion. As police tried to clear them from the streets, protesters retreated into the Yuen Long metro station. In the late evening, baton-wielding police suddenly stormed the station to arrest remaining protesters.

In recent days, calls for the government to completely withdraw the bill, which would allow mainland China to seek extradition of individuals, has morphed into greater frustration at police tactics and the government’s response to protests.

At around 3 p.m. local time on July 28, thousands of protesters arrived at Chater Garden in the Central District for a rally to condemn police use of force in past protests. Organizers said that the turnout at the rally, which went on until 11:00 p.m. local time, was around 11,000 at its peak.

Organizers had planned for a march from the garden to the Sun Yat-Sen Memorial Park in the Sai Ying Pun area, but police rejected the proposal, citing safety concerns.

At around 4 p.m., many protesters began dispersing. Thousands decided to march on the streets regardless, with some headed toward Beijing’s representative office, the Hong Kong Liaison Office.

Tensions escalated as the evening wore on and riot police arrived to disperse the crowd.

Blocks away from the Liaison Office, protesters formed barricades and held umbrellas in a standoff with the police. Some also spray-painted nearby pillars with the slogan “Recover Hong Kong. Age of revolution.”

A masked protester who identified himself as K Lee told Reuters: “We call this Hong Kong’s age of revolution. … This movement has been sparked by China’s refusal to respect Hong Kong’s freedoms, and the failure of authorities to listen to the people’s voice.”

Police fired multiple rounds of tear gas, rubber bullets, and sponge grenades, first around 7 p.m. On Des Voeux Road West in the Sai Wan district, police arrested a dozen or so protesters after firing tear gas. Several protesters were bleeding heavily after being hit by bullets.

At around 9 p.m., the Hong Kong Police Force said in a series of tweets that the protesters were “committing an offense” by “participating in unauthorized assembly” and that some were assaulting officers with objects such as bricks and “committing arson at various locations.” Local media reported that some had set moving carts ablaze near the Western Market to deter police from advancing.

The police use of force, in an area mostly filled with residential buildings, drew complaints from locals, who said they were irritated by the billowing smoke from the gas canisters.

By night’s end, four people were admitted to the hospital for injuries, according to the Hospital Authority of Hong Kong. It didn’t identify whether the injured were civilians or police. A police spokesperson said that they had arrested at least 49 people for unlawful assembly and for possession of weapons during the clearance operations.

The Hong Kong government has condemned both days’ protests in statements over the weekend, reiterating that they would give the police full support.

In Yuen Long, local resident Max Chung applied for a march to be held, calling on the Hong Kong government to meet protester demands, including an independent investigation into police use of force.

Hong Kong media reported that several reporters were hit by the police’s rubber bullets. Protesters eventually retreated into the metro station. At around 10 p.m. local time, violence escalated as police moved in on protesters inside. Some of them fell to the ground as they tried to flee. Bloodstains could be seen spattered on the floor.

24 people were injured, with 2 in serious condition, according to the Hospital Authority.

Amnesty International issued a statement following the violence, saying that the police actions had been “unacceptable.”

“The violent scenes in Yuen Long tonight were in part because Hong Kong police chose to inflame a tense situation rather than de-escalate it,” the statement read. “There were repeated instances today where police officers were the aggressors; beating retreating protesters, attacking civilians in the train station, and targeting journalists. Alarmingly, such a heavy-handed response now appears the modus operandi for Hong Kong police.”

Hong Kong media The Stand News reported that 11 men between the ages of 18 and 68 had been arrested on charges including unlawful assembly, assaulting police officers, and possession of offensive weapons.

On July 28, Hong Kong media HK01 reported that Max Chung had been taken away by police on the charge of inciting unlawful assembly.