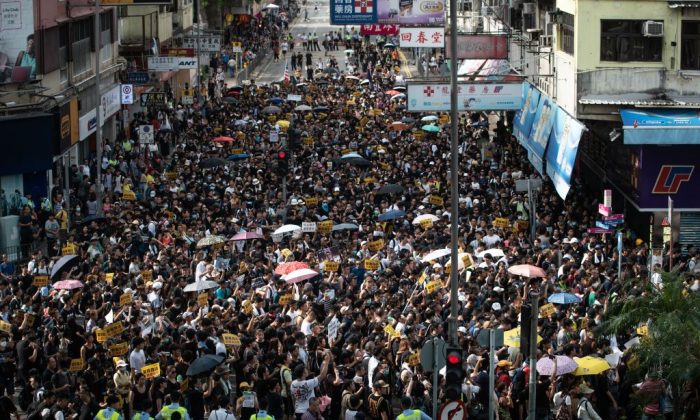 In Hong Kong, another march is set for the afternoon of July 14 as protesters continue on with their demand for the city government to scrap a controversial bill.

Shatin Commons, a community group located in the Sha Tin District in Hong Kong, is the organizer of the march. The march is set for a gathering time of 2:30 p.m. local time at a soccer pitch located at Chui Tin Street, Sha Tin, with the march to begin an hour later.

According to the organizer’s Facebook page, it had originally planned to end the march at the Sha Tin Government Offices. The police have since demanded that the destination be moved to the nearby Sha Tin Central Bus Terminal, citing crowd management reasons.

The organizer has five demands for the Hong Kong government: the complete withdrawal of the bill; a retraction for calling June 12 a “riot”; an independent investigation into police use of force on June 12; the exoneration of individuals previously arrested; and universal suffrage for members of the Legislative Council (LegCo) including the position of chief executive, currently held by the city’s top official Carrie Lam.

The Hong Kong government first proposed the controversial extradition bill in February. If passed, the legislation would allow the chief executive to sign off on extradition requests, including from mainland China, without approval from the city’s legislature.

Many Hongkongers are worried that if such a bill were to pass, Beijing could potentially pressure the city government to hand over citizens of any nationality to face trial in the Chinese regime’s courts under false pretenses.

Shatin Commons said the march was a good opportunity for locals in the community to be more keenly aware of the ongoing protests that have mostly been staged in the central business district on Hong Kong Island. In a Facebook post published on July 13, Shatin Commons explained: “Politics and communities should never be separated. Instead, certain topics of discussion should cause a ripple in the community, affecting more people to join the protests.”

Leung Yin-feng, one of the organizers of the Sha Tin march, told local media HK01 that he expected the turnout to be around 10,000.

The Sha Tin march came a day after another community protest in Hong Kong’s Sheung Shui, which was aimed at taking up domestic issues to widen support for the protests.

About 30,000 rallied against the presence of informal mainland Chinese traders in Sheung Shui, a town that is just a short distance from the southern Chinese megacity of Shenzhen, on July 13. These traders have become a local grievance in recent years, sweeping up local goods, particularly baby milk powder, to haul back into China to sell.

Protesters in Hong Kong continue to call for the full withdrawal of the government’s bill despite Lam announcing in a July 9 press conference that the bill was effectively “dead” but still refusing to withdraw it.

U.S. Senator Pat Toomey (R-Pa.) took to the Senate floor on July 9 expressing his concerns about the situation in Hong Kong as well as his concern about Lam’s remarks.

“Just today the Hong Kong Chief Executive [Carrie Lam] said that the bill is dead; but, it has not been formally withdrawn, as I understand it,” he said. “I think the threat remains.”

Timothy Lee, a community officer in To Kwa Wan South, one of the 24 constituencies in the Kowloon City District, explained the differences between a “dead” bill in the Hong Kong legislature and the U.S. Congress in a July 13 article published by Hong Kong Free Press. Lee is also a former secretary general for the pro-democracy group Hong Kong Federation of Students and is current serving as the president of the community group Synergy Kowloon.

Lee said that in the U.S. House of Representatives, a bill “dies” when it is voted down by either a committee or on the House floor. Additionally, it could also die after not being referred to any committee after the first reading.

In Hong Kong, Lee explained that a bill “dies” when it is voted down during second or third reading at LegCo, or the term of the LegCo ends before the bill is passed, or it is formally withdrawn.

“None of these things have ever happened to the extradition bill,” said Lee, adding that second reading of the bill could still resume.

Lee concluded: “So the extradition bill’s death is fake—it is very much alive.”

Epoch Media Group will be broadcasting the July 14 march live from The Epoch Times and NTD Television’s Youtube and Facebook pages.