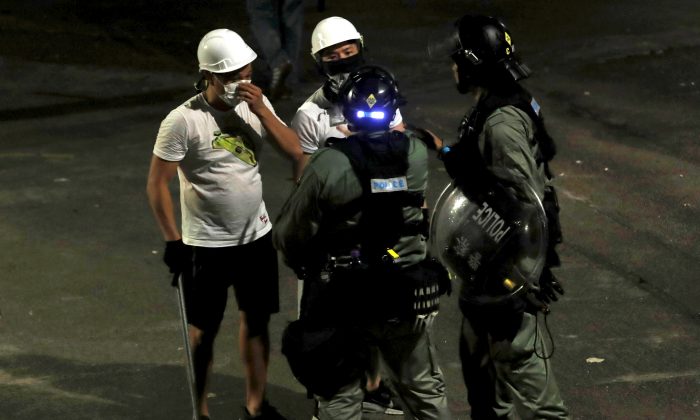 As details from a brazen mob attack at a Hong Kong metro station have begun to emerge, a growing number of Hongkongers are suspecting collusion between the masked attackers and the city’s embattled police force.

Dozens of masked men in white shirts stormed a train station in Hong Kong’s northwestern town of Yuen Long late night on July 21, wielding wooden sticks and metal bars and beating passengers indiscriminately. At least 45 were injured, with one in serious condition, according to the Hospital Authority of Hong Kong.

The police has come under fire for arriving late at the scene. They have since arrested 11 in relation to the attacks, on suspicion of “unlawful assembly.” Police confirmed in a July 21 presser that “some of them [the arrested] have triad backgrounds.”

Many of the victims were black-clad protesters who were commuting back from the city’s downtown area, where an estimated 430,000 Hongkongers had earlier in the afternoon marched against a controversial extradition bill and police use of force in dispersing protesters.

The bill, which proposed allowing any country, including mainland China, to seek extradition of criminal suspects, has drawn widespread protests in recent weeks. Hongkongers have since demanded an independent inquiry into recent clashes between police and protesters, when the former fired rubber bullets, bean bags, and tear gas against concentrated masses of protesters.

The violent attack in Yuen Long has sparked new levels of distrust against the police.

Meanwhile, many politicians and observers have remarked on the historical links between local triads in Hong Kong and the Chinese regime, fuelling speculation that the attack was directed by pro-Beijing forces.

Video footage from eyewitnesses that have circulated online showed that a swarm of masked men began gathering in the streets near Yuen Long at around 9 p.m. They then stormed the subway station around 10 p.m. and started attacking passengers inside at 10:40 p.m., according to local media.

Pro-government gangsters randomly beating ppl up in Yuen Long MTR, with lawmakers and reporters being beaten by gangs.

No police had arrived on site on hour after ppl called 999 emergency line.#HongKongProtest pic.twitter.com/mXSft8jAXk

Apparently HK is not safe anymore – triad members beating everyone with wood battens and fold chair for 30-minutes at Yuen Long MTR station tonight and NONE of the police showed up. This is a humanitarian crisis. #HKprotests #YuenLong #HongKong pic.twitter.com/kytJ9cxVpi

The police, meanwhile, only arrived 40 minutes later at 11:20 p.m. The timing was confirmed at a July 25 press conference by Chan Hon-ming, the deputy police commander for the Yuen Long district, who admitted that the police force were “lacking in some areas” in their response.

Many at the scene tried to phone the emergency hotline but were unable to connect or were hung up on, according to witness accounts told to Hong Kong media. The police station nearby also closed its gates during the unrest, leading to widespread criticisms.

At the press conference, Chan said the police station closed due to “concerns out of crowd control,” as civilians “were very heated” when they gathered outside the station.

The police’s slow reaction led many Hong Kong netizens to suspect police collusion with the triad attackers—fueled by video footage shot by bystanders of police officers chatting with several men in white shirts, who were holding batons and poles in their hands. One of the officers can be seen patting a man’s shoulders before letting him walk away, in streets near where the attack took place.

Riot police giving Yuen Long triad thugs pats on the shoulder
I’m not even surprised at this point pic.twitter.com/Ej3bFAaZQp

At a July 22 press conference, after repeated questioning by journalists about the allegations, city leader Carrie Lam and police chief Stephen Lo denied that police and triads had colluded in orchestrating the Yuen Long attack. Lam called such speculation “groundless,” after sidestepping the question several times.

She also devoted most of the presser to condemning anti-extradition-bill protesters who vandalized the Beijing government’s representative office building.

Lo said the police held a stance “irreconcilable with the triads,” before attributing the slow response to problems with deploying manpower, as police were also dealing with protesters who had occupied roads in another part of town.

He also said the hotline was jammed because hundreds of calls were coming in at the same time.

But when asked about the video where officers did not take action toward the few white-clad men carrying batons, Lo failed to provide an explanation, saying he had to “go back and learn more about the situation.”

Beijing has a history of deploying triads to secure its grip on Hong Kong society.

Prior to Hong Kong’s handover from British to Chinese rule in 1997, Tao Siju, China’s then-Minister of Public Security, said in a 1993 interview with Hong Kong media that a collaborative relationship between the Hong Kong government and local triads was helpful to maintaining “public security.”

“Regarding organizations like the triads in Hong Kong, as long as these people are patriotic and concerned with Hong Kong’s prosperity and stability, we should unite them,” adding that “while some view them as criminal organizations, I think they are very patriotic.”

Tao went on to make explicit that the triads have direct ties to Beijing: “our public security system have broad links and ties with different strata in society, including these groups.” He also recalled an overseas visit by an unnamed Chinese state leader, during which the security team was aided by “a local triad that sent 800 members to protect our state leader.”

Tao’s remarks were deemed an open admission to Beijing’s usage of local triads in securing its control of Hong Kong. They again came to the spotlight as the attack in Yuen Long raised suspicions that the city government was colluding with triads to intimidate and attack extradition-bill protesters.

“The nature of the situation has completely changed,” said columnist To Kit in a July 22 interview with the Hong Kong bureau of the Epoch Times.

“White-shirt men chased after civilians in black clothes [the color worn by protesters] and beat them with sticks, but there were no security or police at the train station, and this lasted the entire night. It makes it obvious that the police, the Hong Kong administration, and the triads have formed an alliance to exert control,” To said.