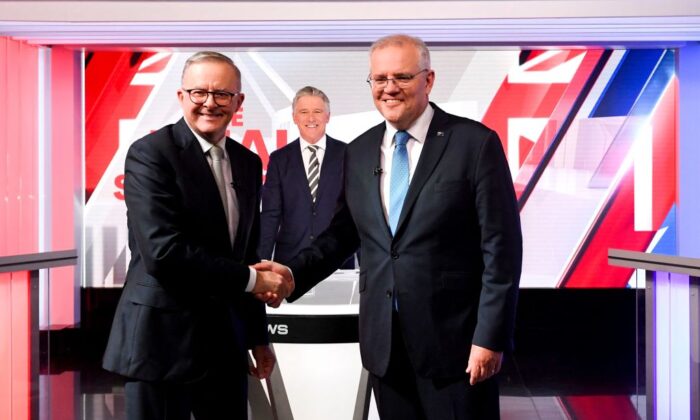 Australian Prime Minister Scott Morrison (R) and leader of the opposition, Anthony Albanese shake hands at the final leaders' debate of the 2022 at Seven Network Studios in Sydney, Australia on May 11, 2022. (Lukas Coch/POOL/AFP via Getty Images)
Australia

Two years of government-mandated lockdowns has left a permanent mark on how suburban and regional Australians approach elections, with voters disillusioned with the major parties and keen for change, according to live streamer Rukshan Fernando.

Fernando was a permanent fixture during months-long protests against COVID-19 regulations in Melbourne in 2021. His live streams of the protests in Melbourne, which provided an alternative view on the lockdowns compared to media outlets and health authorities, helped grow his social media following dramatically to over 400,000.

The live streamer has continued his work by following the federal election on the ground in Melbourne and rural Victoria where he says Australians are taking their vote more seriously than ever.

Fernando does not believe voters are angry at lockdowns or the consequences of government-mandated health restrictions per se, but the last two years have forced residents to examine the actions—and powers—governments have over their lives.

“Particularly around Victoria, a lot of people feel either disillusioned, disenfranchised, or they don’t feel represented. The sentiment that I’ve seen in the community is moving towards independent or minor parties, as opposed to traditionally voting Labor or Liberal [the Coalition],” he added.

The Liberal Democrats, United Australia Party, One Nation, and the Victorian Socialists have all campaigned heavily in the region hoping to generate support from dissatisfied voters.

Melbourne holds the world record for spending the most days under lockdown since the beginning of the pandemic at 262 days.

Australia’s major political parties meanwhile, have struggled to shore up a splintering voter base with portions of the community deserting and leaving for alternatives either further to the left or right of the political spectrum.

In inner-city electorates, the incumbent Coalition faces a big challenge from “teal independents” backed by the Climate 200 group who are advocating for more action to address climate change, while voters in the regions and outer suburbs tell a different story.

“You have a much more complex situation in the outer suburbs and regions, depending on the electorate, which state you’re in, how severe the pandemic lockdowns were for those particular communities, and how the most affected individuals express themselves politically,” Kosmos Samaras, director of the RedBridge Group, previously told The Epoch Times.

The former deputy campaign director of the Australian Labor Party said individuals who had been “hurt severely” by the pandemic lockdowns were opting for minor parties, according to his company’s polling.

Cost of living was the “numero uno” of issues concerning voters, particularly after the Reserve Bank of Australia lifted interest rates to 0.35 percent on May 3, the first increase in a decade.

According to Samaras, there was a “massive groundswell for change,” but even voters themselves “seriously doubted” that politicians could enact real change.

“That’s more of a problem for the major parties to prove to the electorate that they can address some of these issues,” he said.