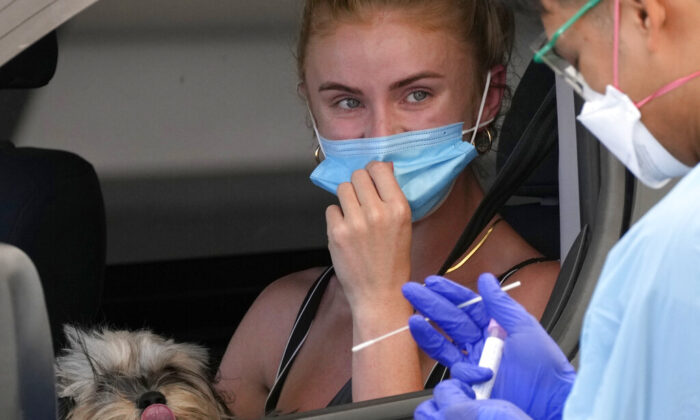 A dog keeps an eye on the presses as a woman has a swab taken at a drive-through COVID-19 testing clinic at Bondi Beach in Sydney, Tuesday, Dec. 21, 2021. (AP Photo/Rick Rycroft)
Australia

Sydney—New South Wales (NSW) has recorded its first death linked to the Omicron COVID-19 variant, amid a surge of cases that has seen the number of people hospitalised across the state double in the past week.

On Monday there were 6324 new infections were diagnosed from more than 97,000 tests on Sunday. However, the state also reported three deaths.

Among them was a man in his 80s who became the state’s first Omicron death, NSW Health says.

The man acquired his infection at the Uniting Lilian Wells aged care facility in North Parramatta. He was fully vaccinated but had underlying health conditions.

While new cases dropped by 70, the number of people hospitalised has doubled in the past week.

A total of 520 people are in hospital, 55 of them in intensive care and 17 ventilated.

Testing numbers decreased by more than 12,000 compared to the day before.

The number of tests processed each day has plummeted by more than 60,000 over the past four days, as testing sites and laboratories become overwhelmed and wait times blow out.

“To ease pressure on testing clinics, we encourage you to only get a PCR test if you do have COVID-19 symptoms, or you are a household contact, or have had a high or moderate risk exposure to COVID-19, or have been directed to be tested,” NSW Health’s Christine Selvey said.

However interstate travellers requiring a PCR test are still able to get one.

The news of the testing wait times comes after hundreds of people received false-negative test results on Christmas Day.

More than 400 people who initially received a negative result on Christmas Day were notified on Boxing Day they had actually tested positive.

St Vincent’s Hospital in Sydney is investigating the incident, but it is believed the result was due to human error.

As the outbreak continues the NSW government has also reverted to restrictions scrapped less than two weeks ago with hospitality venues now returning to the one person per two-square metre rule and QR codes are again compulsory from Monday.

“I’m certainly in deep conversation over probably the last week … about whether or not it’s viable to have staff coming back sooner,” he told reporters on Sunday.

“If you’re erring on the side of caution, it would certainly be an area that you could say probably this would be a safer option than having no staff,” he said.

Hazzard also warned everyone in Australia was likely to be infected with the Omicron variant at some stage.

It is highly likely everyone will spend 10 days in isolation in the next two or three years, he said, but noted symptoms appear milder and the current approach to isolation may change.

“Where’s the planning and where are the resources and where’s the leadership?” Mr Park said.

More than four in five NSW residents aged between 12 and 15 are now fully vaccinated. This increases to 93.5 per cent for people aged 16 and over.