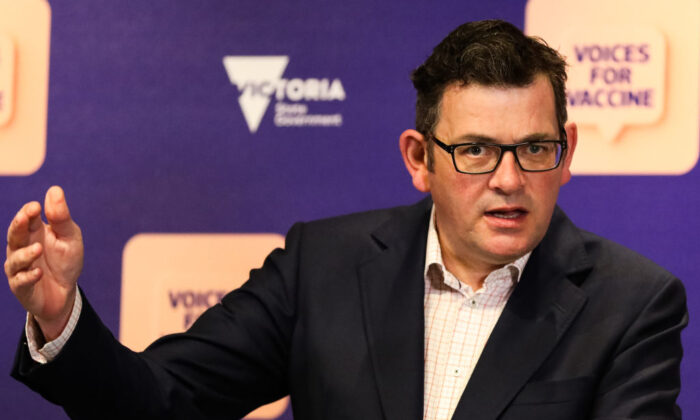 Premier Daniel Andrews, state leader of the Australian state of Victoria, has denied any involvement in “branch stacking” activities which have been the focus of an anti-corruption inquiry into the state’s public service.

Federal Member of Parliament Anthony Byrne has given detailed testimony over the past two days of branch stacking within the Australian Labor Party (ALP) offices in Melbourne alleging ALP faction, the Socialist Left, was involved in the practice.

Andrews, a member of the Socialist Left, said he had not attended factional meetings since 2010 when he became the state’s ALP leader.

“I follow the party’s rules, and I behave appropriately,” he told reporters on Oct. 12.

“If you go and ask [wife] Cath and the kids, they’ll tell you I’ve had no time to do much else other than my parliamentary and my ministerial duties.”

However, Andrews did concede that there was a “cultural problem” in the ALP but maintained that he had taken “unprecedented action” to deal with it, including ordering an audit of current party members.

Victoria’s Independent Broad-based Anti-corruption Commission (IBAC) is conducting a wide-ranging investigation into “serious corrupt conduct” and the misuse of public money for “party-political work or other improper purposes.”

One issue under the spotlight is branch stacking and whether public money had been used to fund such activities.

Australian political parties choose representatives to stand for office via a preselection system that relies on members in each electoral branch to vote for their preferred candidate.

Practitioners of branch stacking will recruit and sign-up members (sometimes by paying them) to influence the outcome of preselecting candidates. While not illegal, the practice is banned under ALP rules.

Byrne, the first witness, to front IBAC, gave a damning indictment of the prevalence of branch stacking in Victoria, saying it was “out of control.”

Donnellan resigned on the first day of hearings admitted to breaching ALP rules but maintained that he did not misuse public funds.

The IBAC investigation was kicked off and ordered by Premier Dan Andrews last year, after a special report by 60 Minutes, and The Age exposed the extent of branch stacking.

Following its publication, MPs Adem Somyurek, Marlene Kairouz, and Robin Scott resigned from the cabinet but remained on the backbench while denying any allegations of wrongdoing.

Somyurek had been accused of branch stacking to help shore up support for the Moderate faction of the ALP.