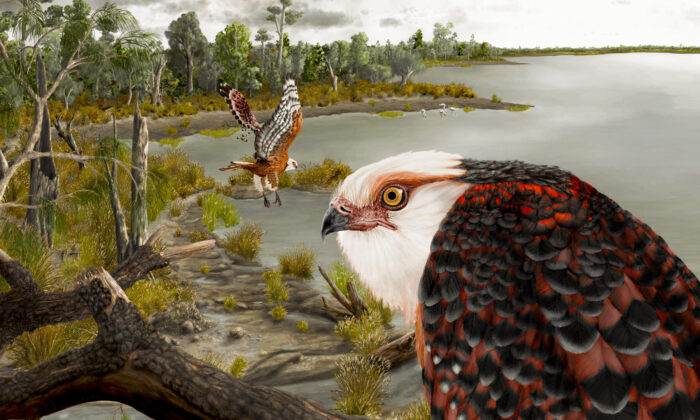 Scientists have discovered an ancient eagle fossil in South Australia that lived 25 million years ago.

The fossil, one of Australia’s earliest examples of the Accipitridae family (eagles, old world vultures, and hawks), is named Archaehierax sylvestris, the ancient Greek for ‘ancient hawk of the forest.’

The fossil from Lake Pinpa in South Australia was found on an outback cattle ranch.

Leading palaeontologist and co-author of the new study Trevor Worthy said that it was an exceptional find.

“I have studied this system for many years now, and this is the most exquisite fossil we have found to date,” Worthy said.

With 63 bones discovered, it is one of the most complete fossils from the late Oligocene sedimentary layers in Australia, as most birds are named on the basis of a single bone.

“It’s rare to find even one bone from a fossil eagle. To have most of the skeleton is pretty exciting, especially considering how old it is,” Worthy said.

“With eagles at the top of the food chain, they are always few in number— and so are infrequently preserved as fossils,” says co-author Associate Professor Trevor Worthy.

The fossil bones revealed that they had relatively short wings and long legs.

“The combination of these traits suggests Archaehierax was an agile but not particularly fast flier and was most likely an ambush hunter,” Flinders University PhD candidate and co-author of the study Ellen Mather said.

The archeologist also believe it would have ruled the air over an Australian environment that was very different from where it was found in present-day central Australia, with the interior of the country in the Oligocene period covered in trees and verdant forests.

“It was one of the top terrestrial predators of the late Oligocene, swooping upon birds and mammals that lived at the time.”

The majestic bird would have hunted koalas, possums and other tree animals in ancient Australia.

“It shows a range of features unlike any seen among modern hawks and eagles,” Mather explained.

“The foot span was nearly 15 cm long, which would have allowed it to grasp large prey. The largest marsupial predators at the time were about the size of a small dog or large cat, so Archaehierax (pron. ah-kay-high-rax) was certainly ruling the roost.”