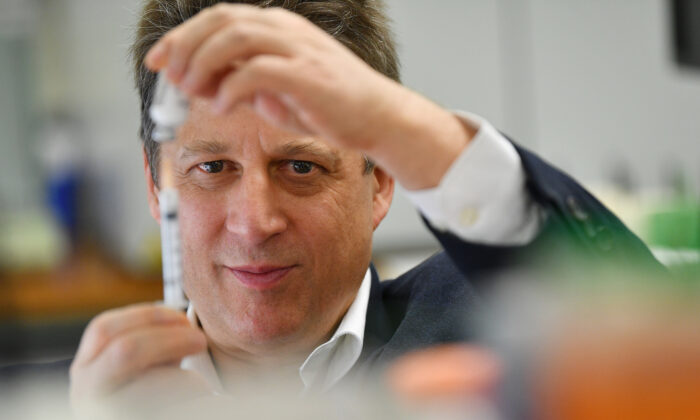 Australian professor and vaccine developer Nikolai Petrovsky faces losing his job after refusing to get one of the Therapeutic Goods Administration (TGA)-approved shots, the ABC reported.

Petrovsky developed his own COVID-19 vaccine, called COVAX-19, through his company Vaxine, which has laboratories at Flinders University. It completed phase one trials in August last year and the Adelaide-based medical researcher has administered the vaccine himself.

However, he now risks losing his job because, as of Nov. 1, workers in health care settings including both public and private hospitals must show proof of at least one COVID-19 vaccine to continue working, as per a government mandate.

While Petrovsky said he is seeking an exemption to the mandate, he claimed he has received a “threatening” letter from Flinders Medical Centre, which is co-located with the university’s medical research labs, stating that he will be suspended from his role if he does not have a TGA-approved vaccine.

“It says that as of yesterday all payments will be suspended and that my position itself will be considered to be made redundant if I don’t submit to having one of their vaccines,” he told ABC Radio Adelaide.

“But obviously under the current mandates, I don’t qualify to be able to work. I’m waiting to hear whether SA Health will grant an exemption or whether I’m out of a job,” Petrovsky added.

“Flinders University is committed to following the requirements of health authorities and Emergency Management Directions in relation to COVID-19.

“We note it is a requirement for anyone entering a hospital setting in SA to be fully vaccinated with a TGA approved vaccine. We have advised our staff, affiliates, volunteers and contractors of this requirement.

“It follows that anyone not having received a TGA approved vaccine is not able to enter health facilities, effective 1 November, unless they have a medical exemption. Whether Professor Petrovsky would qualify for such an exemption is a matter for health authorities.

“Professor Petrovsky through his private company Vaxine has been developing a vaccine which is not currently approved for use in Australia.

“We note that the TGA is giving ongoing consideration to its approved vaccine list.”

Petrovsky administered his own COVAX-19 vaccine, which is based on a protein produced in insect cells, and said he does not want to have any other dose, citing safety concerns.

“That could be very dangerous to do. There is no data on what would happen if you had a full course of one vaccine and then had another course of another kind of vaccine,” he said. “Normally you would have to do clinical trials to establish the safety of that approach,” Petrovsky added.

The professor noted that it “would be a little unusual if we had someone else’s vaccine rather than have the one we’ve developed ourselves.”

Frank Pangallo, a member of the South Australian Legislative Council, took part in the COVAX-19 trial in Adelaide last year before going on to have his first AstraZeneca shot, according to the ABC.

Pangallo said he had no adverse affects after getting both the COVAX-19 jab and the AstraZeneca one.

Last month, Petrovsky said his COVAX-19 jab was “effective against Delta in phase three trials” and had been approved in Iran but had failed to receive support from the Australian government, noting clear differences between the Australian and United States’ response to vaccine developments.

“Fabulous safety. But no support from our govt. WarpSpeed gave US vaccine developers a billion dollars each. We are relying on crowd funding,” he said on Twitter.

Petrovsky previously claimed that his vaccine was not receiving funding from the government because he was not paying them “millions of dollars” to use it.

Speaking in October, Petrovsky said that government ministers had told him, “You’re simply not paying millions of dollars to the Liberal Party’s lobbying firms that are closely associated with the party, and those lobbying firms are being paid millions of dollars by Pfizer and AstraZeneca and unless you’re prepared to match that, and fund these Liberal-associated lobbying companies, your vaccine is never going to get supported by the current Australian government.”

A spokesperson for The Australian government’s Department of Health told The Epoch Times, “Professor Petrovsky’s assertions are absolutely and categorically rejected.

Last week on Oct. 28, Petrovsky also expressed doubts over the current approved vaccines, and said he is one of many vaccine developers who share the same thoughts.

“Because I’m passionate about vaccines—you know, obviously, it’s hard when I have to say—as a vaccine developer, I am not fully confident about what’s happened over the last 18 months. I am not the only vaccine developer in the world who is extremely uncomfortable right now,” he said during a public discussion on mRNA technology.

“We have a situation where we have some very new technologies, in their infancy, and that is the mRNA vaccines, which are the only ones you are being forced to have to remain in employment … I can’t tell you whether there will be a side effect in 10 years from the mRNA vaccine or there won’t be, no one can … In truth, no scientist can, so if they can’t, how can they mandate something which has that level of uncertainty around it?” Petrovsky said.

The professor also confirmed that he will not be “in his role in the medical centre on Monday” because he had not agreed to have one of the TGA-approved shots.

The U.S. Centers for Disease Control and Prevention hasn’t reported any long-term side effects from the approved COVID-19 vaccines, noting that they have undergone and will continue to undergo the most intensive safety monitoring in U.S. history.