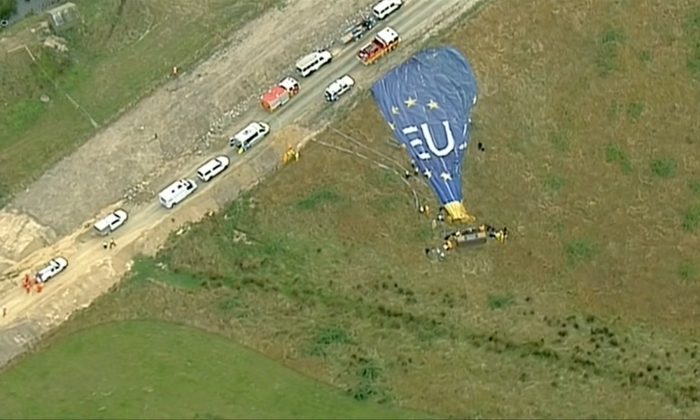 SYDNEY—A hot-air balloon, hit by a surprise weather change, crash-landed on Thursday in a field near Australia’s southern city of Melbourne, injuring at least seven tourists on board, officials said.

Police said the passengers, some from Australia and others from overseas, fell from the basket as the pilot attempted to land following an unexpected weather change, but did not give the nationalities of the overseas passengers.

“The pilot, who has had a flying licence for 30 years, experienced an unexpected south-westerly wind change and had to land in difficult conditions,” said Crock, adding that he had spoken to the pilot.

The ambulance service in the southeastern state of Victoria said it treated the tourists for back and neck injuries at the scene, before sending seven, aged between 20 and 70, to hospital.

Media broadcast images of the upturned basket and passengers lying in the field where the craft landed.

Officials said the balloon took off at 7 a.m. from Glenburn, a small country town north of Melbourne, and traveled about 16 miles south before landing heavily 20 minutes later in Dixons Creek.

The Australian Transport Safety Bureau said it was interviewing the pilot and witnesses to determine the cause of the crash.