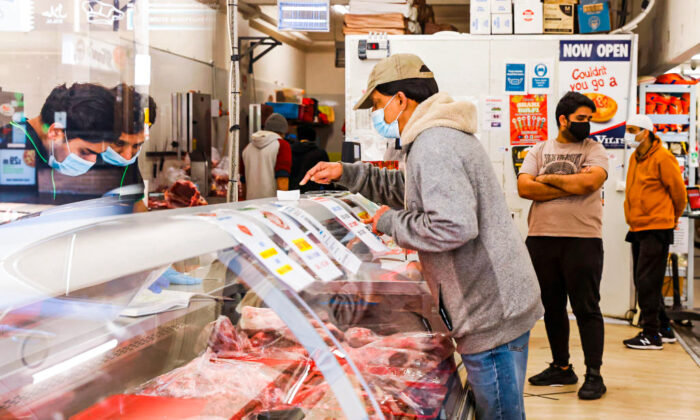 People are seen in a butcher shop in Lakemba in Sydney, Australia, on July 22, 2021. (Jenny Evans/Getty Images)
Australia

Australian Government Should Raise Minimum Wage by 5 Percent in 2022: ACTU

The Australian Council of Trade Unions (ACTU) is calling on the federal government to increase the minimum wage for low paid workers by five percent to help them keep up with rising living costs.

It also said that a quarter of the Australian workforce, or 2.67 million workers, depends on the annual wage review for pay rises.

ACTU Secretary Sally McManus said that the government should approve the five percent increase so that workers could stay ahead of increasing inflation and costs of living.

“We are calling on (Prime Minister) Scott Morrison to support the workers of Australia and back this pay increase,” she said in a statement.

“If this government is serious about addressing the cost of living pressures, it starts with wage growth.”

In the budget released on March 29, the federal government introduced new measures to mitigate living cost pressures, including a halving of the fuel excise to 22 cents per litre, a one-off $420 tax offset for 10 million low and middle-income earners and a one-off $250 payment for welfare recipients.

At last year’s annual wage review, the ACTU asked for a 3.5 percent increase, while business groups recommended a 1.1 percent raise.

McManus said that wages growth was falling behind inflation forecasts, causing an average worker to take home less than $500 in income in the first six months of 2022.

“An increase of five percent that the ACTU will be arguing for is what is needed to get real wages growing and to avoid further pay cuts,” she said.

“The one-off payments of Morrison’s federal budget will do nothing to generate the long-term, sustainable wage growth that workers need or stop the nation’s workforce suffering another year of real wage cuts.”

Meanwhile, according to the wage price index from the Australian Bureau of Statistics, wages rose 0.7 percent in the December quarter of 2021 for both private and public sectors, and the national wage growth was 2.3 percent for the 12 months to December 2021.

The industries that significantly contributed to the wage growth in the December quarter were retail trade (1.2 percent), public administration and safety (0.7 percent), and health care and social assistance (0.6 percent).

At the same time, the federal government predicted in its latest budget that the wage price index would rise to 3.25 percent in the 2022/2023 financial year, while some financial market economists feared that the annualised inflation could go up to at least five percent, instead of the current 3.5 percent.

The Australian Chamber of Commerce and Industry, the largest and most representative business network in the country, did not reply to a request for comment from The Epoch Times.