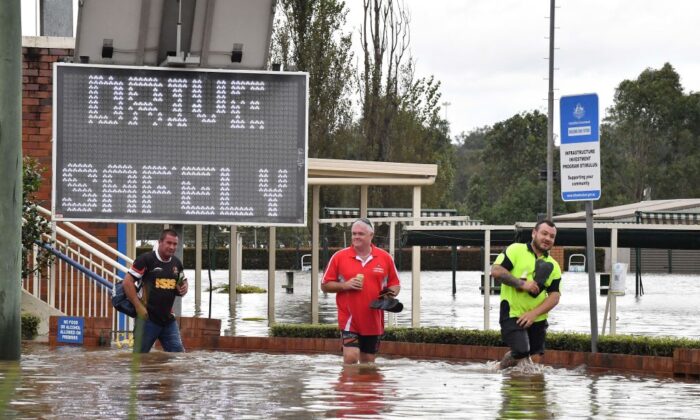 “Sunday night … was the most devastating night the northern rivers has ever seen when it comes to a flood event,” he told reporters in Lismore on Wednesday. “There is no flood event that has occurred in this part of Australia like this in any one person’s living or recorded memory recorded memory, and that’s a profound statement.”

Morrison will formally meet the governor-general on Friday to recommend a National Emergency Declaration for the natural disaster.

This is the first time the national emergency powers, established after the 2019-20 Black Summer bushfires, have been used.

It cuts the red tape between state and federal governments, such as allowing the deployment of the Australian Defence Force (ADF) without a formal request from the states.

The rain began easing on Wednesday, but around 40,000 people remain under evacuation orders across the state.

The weather event has claimed 21 lives as of Wednesday, of which 13 are Queenslanders and eight from NSW.

The declaration comes after Sydney’s northern beaches were inundated by flooding on Tuesday and the Manly Dam began overflowing on Tuesday evening.

A high student who attends a school located in a low lying area near Manly Dam told The Epoch Times on Tuesday that only a tiny part of the oval across the road had been flooded when she arrived at school.

However, the ground floor classrooms were flooded up to students’ shins by afternoon, and the car park had inundated.

“The cars were almost completely submerged, and I saw one float away,” she said. “The oval was completely underwater, neck deep.”

River water levels are also still rising despite the reprieve in the rain. Major flooding is also occurring along the Hawkesbury River, which peaked at 14.1 metres (46 feet).

The NSW State Emergency Services (SES) also warned communities in parts of north-western NSW, including Mungindi and Collarenebri, of potential flooding as floodwater travel down river systems from Queensland.

Meanwhile, residents of Sydney have been told that although the heavy rainfall will be easing, the weather system will be replaced by dangerous winds of up to 111 kilometres per hour (69 miles) in some areas along the east coast, from the Hunter to Illawarra and the South Coast.

Sydney Trains is advising people to avoid any non-essential travel as the network experiences significant disruptions due to flooding.

“Please take care, slow down, there may be additional hazards that can arise very quickly,” Ward told reporters.

Ward also addressed the growing number of potholes, saying they could only conduct temporary repairs until the weather dries.

“There will be a lot of them out there. It is going to take a long time to get them fixed,” she said.

Additionally, the ADF is significantly ramping up support for flood-affected communities, deploying more than double the number of personnel over the week, from 2,300 to 5,000, after community criticism over lack of help.

This will supplement around 1,600 SES and government personnel who have been on the ground helping communities recover.

NSW Premier Dominic Perrottet told 2GB radio on Tuesday that without the “courage and heroism” of residents who were going out and looking after strangers, the outcomes from the extreme weather event could have been much worse.

Why Has There Been So Much Rain?

A team of researchers investigated why Australia was experiencing so much wet weather in the past few months and found that the simultaneous occurrence of two climate factors has caused all the rainfall—La Niña and a positive Southern Annular Mode (SAM).

La Niña and its opposite phase, El Niño, involves cycling weather patterns across the tropical Pacific Ocean. During La Niña, moisture from the ocean is transported to the land and is more easily converted to rain.

SAM is the north-south movement of westerly winds over the Southern Ocean. A positive SAM occurs when the usual westerly winds shift southward, bringing moisture-filled winds into eastern Australia.

Individually, both climate oscillations bring more rain, but Australia is currently experiencing both at the same time, triggering the “rain bomb.”

“The current La Niña event is past its peak and is predicted to dissipate in autumn,” Chiara Holgate, hydroclimatologist at the Australian National University, said. “But because our catchments are so full of water, we still need to be on alert for extreme weather.”