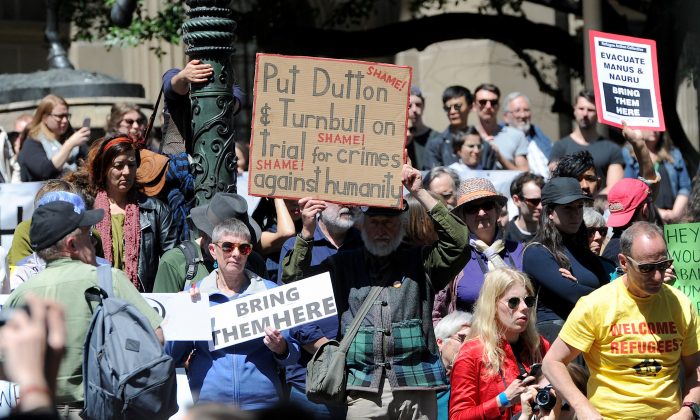 SYDNEY—Australia turned down on Sunday an offer to take 150 asylum seekers being held in an Australian-run detention center in Papua New Guinea, where U.N. officials have warned a humanitarian emergency is unfolding.

About 600 men have barricaded themselves inside the camp on remote Manus island in Papua New Guinea, defying efforts by Australia and PNG to shut it. Food, running water and medical services were cut off by Australia five days ago.

Australian authorities want the men moved to a transit center elsewhere on the island at the start of a process the asylum seekers fear will result in them being resettled in PNG or another developing nation. The men also fear violent reprisals from the local community.

New Zealand Prime Minister Jacinda Ardern said on Friday her country was willing to take 150 asylum seekers from among those held on Manus island and another camp on the tiny Pacific nation of Nauru.

Her Australian counterpart, Malcolm Turnbull, however said Canberra preferred to work through an existing refugee swap deal he negotiated with former U.S. President Barack Obama last year. Under that deal, up to 1,250 asylum seekers could be sent to the United States and Australia will in turn accept refugees from Central America.

“We want to pursue those, conclude those arrangements, and then in the wake of that obviously we can consider other ones,” Turnbull told Ardern during a media conference in Sydney.

Relocating the men on Manus island is designed as a temporary measure, allowing the United States time to complete vetting of asylum seekers.

The camps on Manus island and Nauru have been key parts of Australia’s disputed “Sovereign Borders” immigration policy, under which it refuses to allow asylum seekers arriving by boat to reach its shores.

Australia’s offshore detention policies have been heavily criticized by the United Nations and human rights groups but are backed the center-right government and the Labor opposition.

U.N. rights spokesman Rupert Colville told a news conference in Geneva on Friday about the “unfolding humanitarian emergency” in the Manus island center, where asylum seekers have been reported digging wells to try to find water.