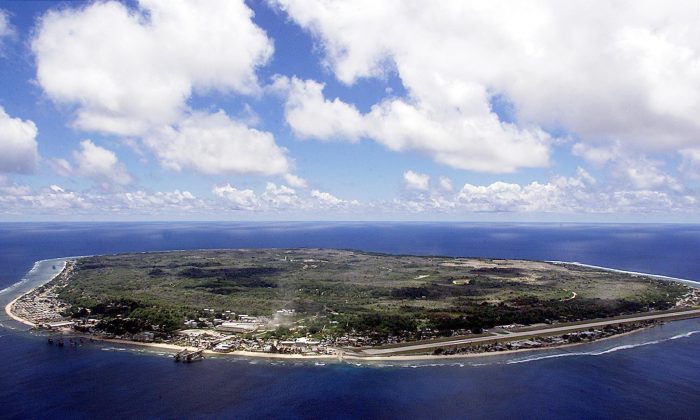 The island state of the Republic of Nauru awaits the arrival of 521 mainly Afghan refugees, 11 September 2001 which have been refused entry into Australia. (Torsten Blackwood/AFP/Getty Images)
Australia

The Australian government announced on Feb. 3 that there will soon be no children held in its immigration detention camps on the Pacific island of Nauru.

Prime Minister Scott Morrison said in a statement that the final four asylum-seeker children in the Australia’s offshore processing camps on Nauru have all had their claims to be resettled in the United States processed.

[1/2] With the last four children booked to leave for the US, every asylum seeker child will now be off Nauru. pic.twitter.com/yp17a8S1sR

“Every asylum-seeker child has now been removed from Nauru or has had their claim processed and has a clear path off the island,” Morrison said, in a joint statement with Immigration Minister David Coleman and on Twitter.

Under Australia’s strong border protection policies, illegal immigrants who are intercepted at sea, including genuine asylum seekers, trying to reach the country are sent to offshore processing camps, like those established under the Gillard-Rudd Labor government in the neighbouring states of Papua New Guinea and Nauru.

While all asylum seekers that come to Australia illegally by boat are in the eyes of the law “unlawful non-citizens,” Australia is a nation that chooses to offer refuge and humanitarian assistance to refugees according to the 1951 Refugee Convention through four offshore refugee visa categories; refugee, in-country special humanitarian, emergency rescue, and women at risk, as well as its global special humanitarian visa.

Australia has stopped publishing data on the number of refugees held in the offshore processing centres since the number of boat arrivals has been dropping steadily since the Abbott government introduced its policy Operation Sovereign Borders in 2013 to combat the spike in illegal arrivals that started in 2009.

According to statistics released by the Department of Home Affairs, as of Dec. 31, 2018, only 1,285 asylum seekers remain in detention, of which less than 20 percent are in offshore facilities. At the end of 2013, 6,122 people were being held in immigration detention.

Of the 1,285 asylum seekers currently in detention, the majority remaining are from New Zealand (150), followed by Iran (138), Vietnam (110), Sri Lanka (84), and Sudan (57). There were also significant numbers of detainees from India, the UK, Afghanistan, Iraq, and 45 detainees who are stateless.

By Will Ziebell. Epoch Times writer Alan Cheung contributed to this article.

Support for Australian Government Rises Ahead of Election

The Newspoll published in The Australian newspaper showed the Liberal-National coalition government trails the main opposition Labor party by a margin of 53 percent to 47 percent on a two-party preferred basis under Australia’s preferential voting system, where votes from minor parties are redistributed.

While still on course for an election defeat, the Newspoll is the best result for Morrison’s government since the ousting of former Prime Minister Malcolm Turnbull in August 2018.

The removal of Turnbull, which ushered in Morrison as the sixth different prime minister in the last decade, saw voters abandon the government amid widespread anger at the ousting of the popular liberal lawmaker.

Morrison’s government was quickly plunged into minority form after voters selected an independent to replace Turnbull, who quit politics shortly after his removal.

Morrison must return to the polls by May 2019, an election that is poised to be fought over inequality.

Morrison’s government, which late last year delivered its strongest fiscal outlook in 10 years, is expected to promise tax cuts and sweeteners in the final budget in April.