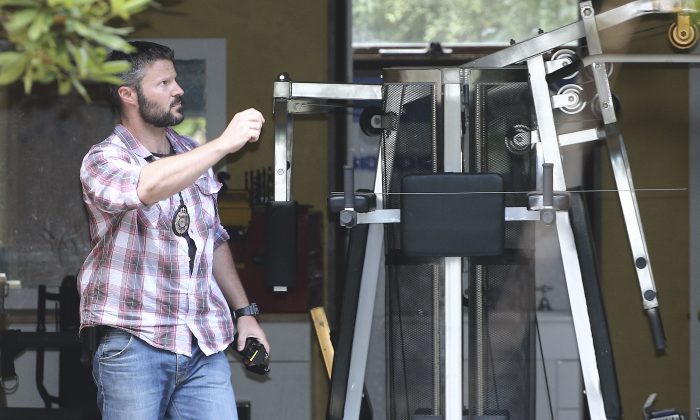 A Federal police officer walks through the garage at the home of a Sydney man in Sydney, Australia, Wednesday, Dec. 9, 2015 as they search the property as part of a tax investigation. (AP Photo/Rob Griffith)
Australia

SYDNEY—Australian police on Wednesday raided the home and business premises of a man that technology news sites have claimed is the founder of virtual currency bitcoin.

A statement from the Australian Federal Police said the searches were related to a tax investigation and not recent media reports on the virtual currency, which is used for transactions across borders without third parties such as banks.

Federal officers and tax officials refused to answer questions as they left the house in a Sydney suburb hauling two black roller suitcases.

Since bitcoin’s birth in 2009, the identity of currency’s creator has remained a mystery. The person, or people, behind the digital currency’s inception have been known only as “Satoshi Nakamoto,” which many observers believed to be a pseudonym.

In March last year, American Dorian Prentice Satoshi Nakamoto denied in an exclusive interview with The Associated Press that he was the inventor after Newsweek published a 4,500-word cover story linking the currency to him.

Attempts to reach the Sydney businessman that reports claim is Nakamoto were unsuccessful.

A man answered a mobile phone number belonging to the businessman’s wife. When an AP journalist asked if she was speaking with the person named as Nakamoto, he asked who was calling. When told he was speaking to a reporter, the man said, “Sorry. Not here,” and hung up. Voicemails left on the man’s mobile and office numbers were not returned.

His LinkedIn profile lists him as working for a Sydney company that focuses on “alternative currency” and “next generation banking.”

The police search of the man’s home in the wealthy northern Sydney suburb of Gordon lasted several hours and drew a steady trickle of perplexed neighbors into the quiet, tree-lined street.

Many described the man as quiet and somewhat standoffish, and said they had noticed the family kept an unusual amount of electronics running in the sunroom at the front of their two-story brick house. None had seen the family on Wednesday; letters overflowed the mailbox and the garbage bins were full.

“He has his computer running quite often,” said a teenage neighbor, who declined to give his name.

The teen said the family had lived at the house for about a year and has two kids, a dog and several hens. The family drives a Jaguar and a Lexus, but rents the property, the teen said. He had no idea he had been named as the alleged founder of bitcoin.