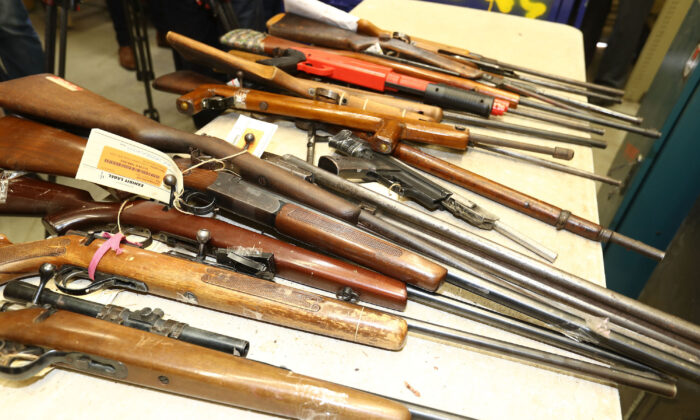 Weapons that were surrendered due to the National Firearm Amnesty are seen at the Victoria Police Forensic Services Centre in Melbourne, Australia, on Aug. 11, 2017. (Robert Cianflone/Getty Images)
Australia

Three tonnes of firearms, including rifles, pistols and shotguns, will be destroyed in the Australian state of  New South Wales (NSW) this month after being seized by police in criminal investigations or handed in by the community.

Police Minister Paul Toole said the vast majority of the Australians in NSW who possessed firearms all had them for valid reasons, however, there were those in the community who used the weapons to inflict fear or cause harm to others.

“Police across the state are committed to getting those weapons off our street to keep our community safe,” Toole said.

Every weapon destroyed was a win for the community and officers, Police Commissioner Karen Webb said.

“We’ve all seen the harm that is caused by the unlawful use of firearms and the fear it can cause within the broader community,” Webb said.

“Some of these items are collected through long-term, complex criminal investigations and others are located through isolated search warrants and police incidents.

“By destroying these weapons, we prevent any that are kept for legitimate purposes from falling into the wrong hands and used in other crimes.”

Police collect hundreds of firearms every week which are then sent to the NSW Police Weapons and Ordnance Disposal Unit before being audited and processed for destruction.