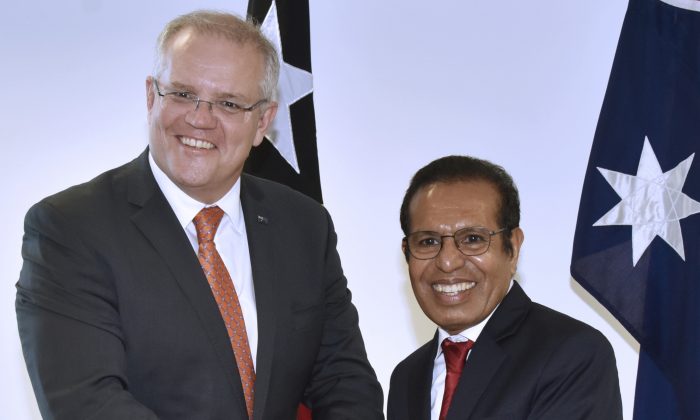 SYDNEY—Australia will refurbish a naval base and help bring high-speed internet to the tiny Pacific nation of East Timor, Prime Minister Scott Morrison said on Aug. 30, the latest effort by Canberra to win influence in the region.

“This is a new chapter for Australia and Timor-Leste that is based on our shared respect, interests and values,” Morrison said in prepared remarks for a ceremony in East Timor’s capital, Dili, to mark the 20th anniversary of its independence vote from Indonesia.

East Timor, one of the poorest nations in the region, is set to receive billions of dollars from its share of the Greater Sunrise gas and oil fields after renegotiating a maritime boundary with Australia.

The often-fractious negotiations over more than a decade—Australia was condemned by the International Court of Justice for spying on East Timor’s negotiating team—strained relations between the two neighbors as China strengthened its ties with East Timor.

Timor has been in talks with Chinese banks over funding all or part of the $11 billion Timor needs to build a gas processing facility and port on its south coast, raising concerns among some security analysts that Beijing could emerge as Timor’s major trading and diplomatic partner.

Australia’s aid package announced on Friday includes two Guardian Class patrol boats and funds for a new wharf and other facilities at the Hera Naval Base on East Timor’s north coast.

It also offered to fund a concept design for a larger upgrade of the base.

Canberra pledged to help improve internet service to the country of 1.25 million people which relies on expensive and unreliable satellite links for web access.

Australia will fund the front-end engineering and design process for a fiber optic cable connecting East Timor to the North-West Cable, which runs from Darwin in Australia’s north to Port Hedland in Western Australia.

The cost of the aid package was not disclosed.

Impeachment Investigation Against Cuomo to Move ‘As Quickly as Possible’: NY Assembly Speaker
0