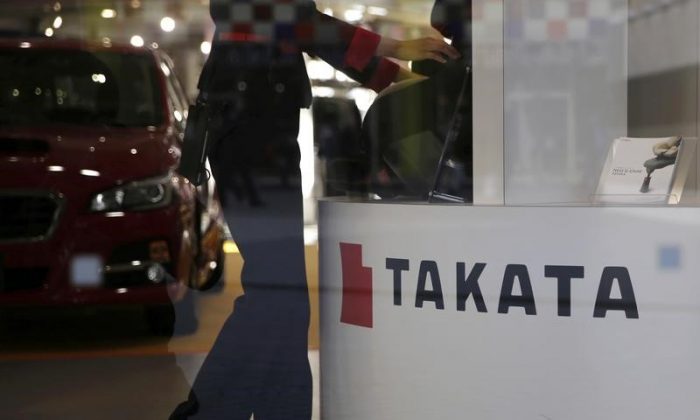 A woman stands next to a logo of Takata Corp at a showroom for vehicles in Tokyo, Japan, Nov. 6, 2015. (Reuters/Toru Hanai/File Photo)
Australia

SYDNEY—Australia said on Monday it was recalling an additional 1.1 million cars fitted with Takata Corp air bags, increasing the size of the country’s biggest ever compulsory recall to just under four million cars.

The Takata airbags have been linked to at least 18 deaths and 180 injuries globally because the inflators can rupture and shoot metal fragments into vehicles, leading to mass recalls around the world.

Australia has already ordered that manufacturers, including Audi, Ford, Volkswagen and Toyota, replace almost three million airbags by Dec. 31, 2020, or face fines of A$1.1 million ($830,834) per breach.

The Australian Consumer and Competition Commission (ACCC) said on Monday the additional 1.1 million vehicle models would be recalled at a later, unspecified date.

Michael Sukkar, assistant minister to the Treasurer, said drivers of the vehicles added to the list would be informed of the timetable for replacement directly.

Pressure is growing on manufacturers globally to meet recall timetables.

The U.S. auto safety agency said earlier this month it wanted to meet with 12 major automakers that failed to fulfil a December 2017 target deadline for completing repairs on the highest-priority vehicles.

Takata has been hit hard by the scandal, filing for bankruptcy a year ago as it sought court protection from creditors after almost a decade of recalls and lawsuits.