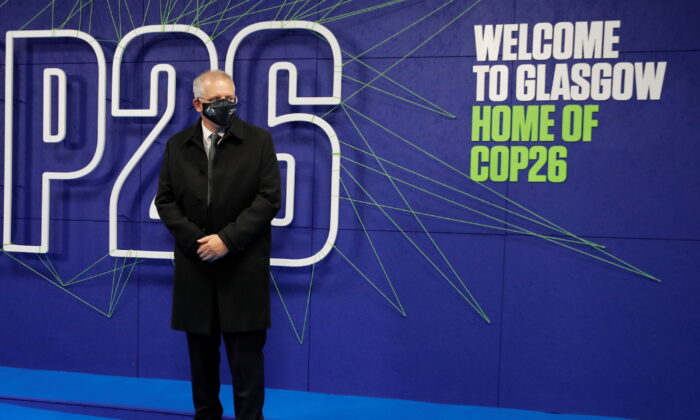 Prime Minister Scott Morrison has announced that Australia will bypass international bodies to invest directly in its Asia and Pacific partners when it increases its climate finance commitments to $2 billion (US$1.5 billion).

Morrison, who is attending COP26 with political leaders from Fiji, Tuvalu, and Palau, said he wants to cut out the red tape and bureaucracy to make sure the funding gets directly to where it’s needed within the Pacific region.

“Now we’re not putting this through other worldwide institutions or other groups like this,” Morrison said at COP26 in Glasgow on Tuesday.

“We’re doing this direct, because we want to make sure that the climate finance investments that Australians are making are being invested in our backyard amongst our Pacific Island family and amongst our South East Asian partners and friends.”

The prime minister said the funding would assist countries in the region to reduce their own carbon emissions and deal with the consequences of climate change already seen in many Pacific Island nations.

Pacifical Island nations will receive $200 million through direct grants for “real projects a reality for them on the ground.”

“We were just discussing examples in the South Pacific where they’re having to pay 13 or 14 cents a kilowatt hour to produce electricity with current technologies,” Taylor said.

“But what we’ve laid out in our plan is a pathway to get those costs to a fraction of that over the coming decade. We know within range of producing electricity from solar at more like 1.5 cents a kilowatt hour with backup and storage, which is what you need.”

Bainimarama wrote on Twitter, “Australia’s pledge is a start. I’ve now urged [Morrison] to show us a concrete plan to halve emissions by 2030.”

“I’ve given him a copy of Fiji’s Climate Change Act as a guide—it is our uniquely Fijian way of following the science to keep faith with future generations.”

Morrison acknowledged that Pacific leaders have always asked him to increase his net zero target, and said he’s confident their new plan met that commitment.

At COP26, Morrison said he is urging world leaders to drive down the costs of the low-emissions technologies that they want developing countries to take up in the fight against climate change.

“We can’t control the cost of carbon based fuels in China or in India or in Indonesia,” he said. “But what we can do is work with those countries to ensure that the technologies they are adopting for their industrial growth and their strength and their jobs is low emissions and low cost, which actually can help them achieve their jobs.

Australia’s 20 percent reduction of emissions since 2005 was “underappreciated,” but exceeded many other countries with like economies, Morrison said.

The Australian government has projected that emissions will reduce 35 percent by 2030.

“Just talking about technology and saying technology over and over is not a framework for the development and adaption, or the adoption, of that technology,” he said.