Audience Member Hopes to Keep Shen Yun in Her Memory 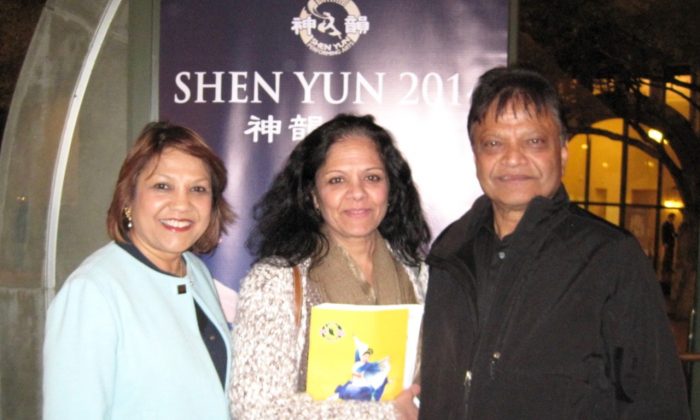 “The colors, the synchronicity, and music, the whole thing is just set in my eyes, and I want to just keep it there. I don’t want to wipe it out. It’s so, so amazing. We’re so glad we came,” said Mrs. Mody at the California Center for the Arts on Jan. 27.

At the heart of a performance is classical Chinese dance. “Known for its incredible flips and spins, and its gentle elegance, it is one of the most rigorous and expressive art forms in the world,” states the company website.

The themed story-based, folk, and ethnic dances are accompanied by live orchestral music with Chinese and Western instruments, and are interspersed with pieces by vocal and instrumental soloists.

“It was very well done,” said Mrs. Mody, who was accompanied to Shen Yun by her husband Dipak Mody and their friend Priti Parikh.

Mr. Mody said he very much enjoyed the dances. All three were impressed by Shen Yun’s vocalists and especially the lyrics, which were projected on the backdrop in English.

“It was so spiritual and to the point for this time and age … that’s what impressed me,” said Mrs. Mody. “Because we all want to escape from this rut in life. That’s the only way we can do it, is to think about it and believe in the faith, and heaven, and why we are here.”

Once China’s true culture was considered passed down from the heavens, with Buddhist, Taoist, and other disciplines at the heart of society. Unfortunately, the Communist regime “has uprooted traditional beliefs and destroyed ancient treasures—bringing traditional 5,000 years of civilization to the brink of extinction,” through systematic campaigns such as the Cultural Revolution, according to Shen Yun’s website.

Shen Yun Performing Arts seeks to revive these ancient values and traditions, which are a fundamental part of one’s life, said Mrs. Mody.

“If you’re ever in trouble, you can hold on to your beliefs, the culture, spirituality,” she said. She felt a kinship with the Chinese culture portrayed by Shen Yun, saying there were many similarities between her Indian heritage and Chinese civilization.

Mrs. Mody said the performance reminded her that everything we see on this earth will eventually pass and go away, but what we are doing right now is what truly matters.

Overall, she said Shen Yun is just beyond words.