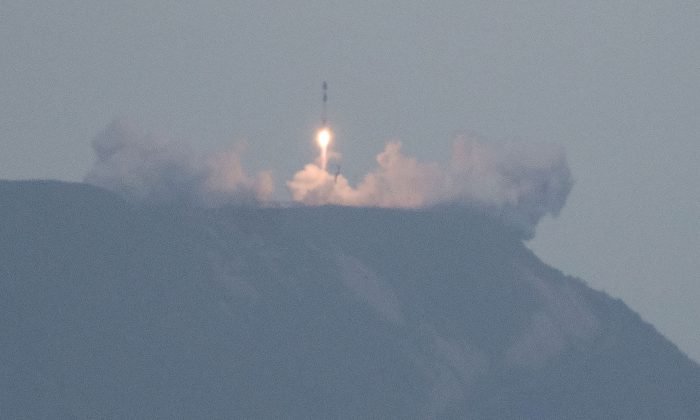 Rocket Lab's Electron rocket lifts off from its launch site in Mahia, on the east coast of New Zealand's North Island on May 25, 2017. (Marty Melville/AFP/Getty Images)
Space

A New Zealand space company has come under fire after secretly launching a reflective satellite that will create a flashing light visible from anywhere on earth.

Astronomers around the world have expressed anger after space exploration startup Rocket Lab sent the “Humanity Star” into orbit, a three-foot-wide sphere fitted with 65 reflective panels.

It is expected to be the brightest object in the night sky for nine months, after which it will re-enter Earth’s atmosphere, the Guardian reported.

Rocket Lab founder Peter Beck told the Guardian the Humanity Star was intended to be a “reminder to all on Earth about our fragile place in the universe” and would “create a shared experience for everyone on the planet.”

But astrophysicists say that the company should have taken their concerns about light pollution into account before launching a sparking disco ball into space.

Astronomer Benjamin Pope tweeted, “Oh god why would you do this to us astronomers”.

Director of astrobiology at Columbia University Caleb Scharf wrote, “another invasion of my personal universe, another flashing item asking for eyeballs.”

“Most of us would not think it cute if I stuck a big flashing strobe-light on a polar bear, or emblazoned my company slogan across the perilous upper reaches of Everest,” the scientist wrote in Scientific American.

He continued, “Jamming a brilliantly glinting sphere into the heavens feels similarly abusive. It’s definitely a reminder of our fragile place in the universe, because it’s infesting the very thing that we urgently need to cherish.”

However, as you might expect Rocket Lab founder Peter Beck sees the Humanity Star more positively.

“Our hope is that everyone looking at the Humanity Star will look past it to the vast expanse of the Universe and think a little differently about their lives, actions, and what is important for humanity,” he said in a statement.