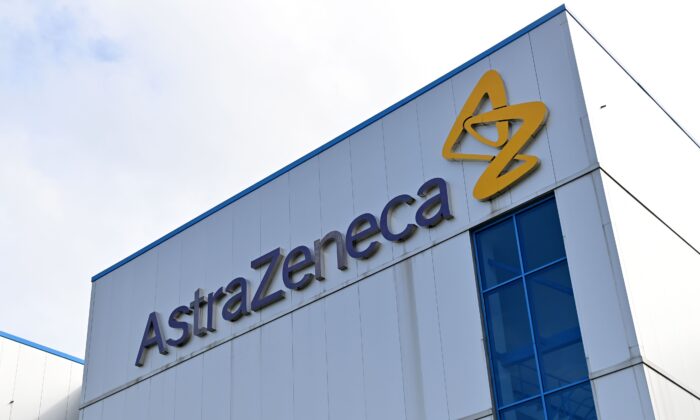 An office of British-Swedish multinational pharmaceutical and biopharmaceutical company AstraZeneca is seen in Cheshire, England, in a file photograph. (Paul Ellis/AFP via Getty Images)
AMERICA

European drugmaker AstraZeneca this week said a late-stage study showed its antibody drug cocktail is effective at keeping COVID-19 patients out of hospitals.

The phase 3 trial preliminary results showed the drug, a long acting antibody (LAAB) combination, cut the risk of developing severe COVID-19 or dying by 50 percent compared to a placebo in people who did not require hospitalization and had been showing symptoms for a week or less.

The drug, AZD7442, was even more effective when given within five days of symptom onset, according to AstraZeneca.

“These positive results show that a convenient intramuscular dose of AZD7442 could play an important role in helping combat this devastating pandemic,” Mene Pangalos, executive vice president of biopharmaceuticals research and development at AstraZeneca, said in a statement.

Early trial results were based on an analysis of 822 participants. The trial included 903 participants, about half of whom were given a placebo. The full results will be submitted to a peer-reviewed medical journal and presented at an unspecified upcoming meeting, the company said.

The statement continued the trend of companies releasing summaries of trial results well before the full data are available, a trend that has frustrated some experts.

The drug does appear to significantly reduce the chances of a COVID-19 patient needing hospital care but, as is the case with Merck’s antiviral, not much data on the drug’s safety was released, Carome said.

“As so often the case with these press releases, they sort of focus on the potential benefits and downplay or exclude important information about understanding the risk of adverse events. And so, eventually, that information will be submitted to the FDA and will come out but right now we don’t have that data,” he added.

Merck announced Monday it was seeking emergency use authorization from the Food and Drug Administration (FDA) for its drug, which is in a pill form and requires a five-day course.

AstraZeneca last week submitted documents to the drug regulator for its LAAB, but only for prophylactic, or preventative, use.

The new trial data was shared with the FDA, the company said.

If authorized, the drugs from Merck and AstraZeneca would be added to a growing number of COVID-19 treatments, including remdesivir and monoclonal antibodies from Eli Lilly, GlaxoSmithKline, and Regeneron.

“I think in general these are helpful and are giving us more arrows in the quiver,” Dr. Roger Klein, who has advised U.S. government agencies like the Food and Drug Administration and currently works as a policy adviser to the Heartland Institute, told The Epoch Times.

“It will be helpful to see the primary data” from the Merck and AstraZeneca trials, he added.