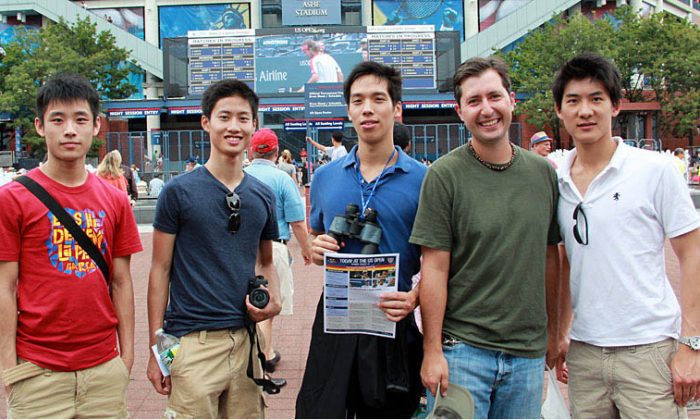 CUDDEBACKVILLE—May has been officially designated Asian American Pacific Heritage Month. Some Chinese-Americans who live in Orange County bring a 5,000-year-old culture to this country through performance in dance.

They shared their experiences as Chinese-Americans and dancers in the internationally-recognized dance company. Both train at Shen Yun’s home in Cuddebackville, Deerpark.

I feel very lucky to be an American now and to be able to share this culture with the rest of the world.
— Ashley Wei, dancer, Shen Yun Performing Arts

Wei was born in China and recognizes she has the freedom to express traditional Chinese culture in America, unlike China where it originated. Since the Cultural Revolution, the Chinese Communist Party has tried to eradicate traditional Chinese customs like belief in the divine that have underpinned Chinese culture for centuries. “I feel very lucky to be an American now and to be able to share this culture with the rest of the world,” she said.

Song has been dancing for eight years. He says training is “very systematic, very, very rigorous,” and dancers spend hours each day in rehearsals, stretching, and doing choreographed dances. “It requires a high level of flexibility,” he said. “It takes a lot of thinking to be able to express the character, what kind of feeling you want to express.”

He said the art form requires as much precision as ballet. What’s key, however, is not the ability to do the moves, but to have the heart to interpret the meaning of the dance.

“It’s about doing the move in a certain way so it reflects certain aspects of our culture while still maintaining your inner grace and feeling and letting the audience know what you are trying to express.”

Wei says she does stretches even during breaks in training. “It involves a lot of sacrifice,” she said.

The life of a young Chinese-American classical dancer is not as casual as that of other millennials. Song, 23, says dancers in Shen Yun hope to change some trends influenced by computers. “We are not going with the trends,” Song said.

Wei, 21, has been dancing for seven years and says her rigorous daily routine is also quite different from her contemporaries. “It’s not something normal teenagers can do these days. Their attention span is shorter.”

Her strict training regimen has its compensations. Wei says her life “is much simpler and it is happier.”

Song would like to see a higher level of culture in American society. Living according to high moral principles makes life meaningful, he says. “That’s what motivates us to do our best every day, to give our fullest every single show. I think it’s well worth the toil.”

He says his performances present an “awesome culture” that is so meaningful that people often leave the show in tears.

Wei said many in the audience have said they feel uplifted by the message of hope. She said Shen Yun tries to revive traditional values and restore faith in humankind.  “They see something different from a Broadway show,” she said.

Wei says the audience also gives back to her. “They give me the motivation to keep going.”

Song tours in one of Shen Yun’s international companies, which this year traveled throughout Canada and Europe, as well as in some American cities. Wei’s company toured throughout the United States, Mexico, and Argentina.

There are many diverse celebrations on the American calendar. Wei’s favorite holiday is Christmas. She appreciates the spiritual aspect of the holiday. “I saw how willing people were to rejoice over something religious,” she said. As a child, she liked the presents, the Christmas tree, and having a family celebration. “It’s a very heart-warming tradition,” she said.

Song said he likes World Falun Dafa Day on May 13.  He is a practitioner of Falun Dafa, a meditation and qigong practice based on the principles of truth compassion and tolerance. He said the slow-moving exercises help him quickly recover from intense training and a long touring season, and he recommends it to anyone. “This day [May 13] is very special for me.”

Wei said traditional Chinese culture is suppressed in China. She also practices Falun Dafa, also known as Falun Gong, which has been persecuted in China since 1999 because of its spirituality that the Chinese Communist Party has tried to stamp out, and its widespread popularity.

I didn’t really know my heritage until I came to this school to dance.
— Alvin Song, principal dancer, Shen Yun Performing Arts

Song  grew up in Princeton, New Jersey where most of his friends and classmates were not Chinese.  He said he became acquainted with his own culture when he learned traditional Chinese dance. “I didn’t really know my heritage until I came to this school to dance,” he said.

Wei said there is some Chinese culture that is still preserved in China. She arrived in this country at the age of eight and her life in America actually helped her to appreciate her own culture. “As I absorbed and assimilated to American culture, this helped me develop my inner Chinese,” she said.

She says diversity works both ways. “Bringing my authentic Chinese culture to America, I feel I’ve enriched [America]. I’ve also learned a lot from this society.”

With American history going back only about 300 years, Chinese culture has a lot to offer with its 5,000 years of history. “A lot more things can happen in 5,000 years—over 20 dynasties, so many different historical figures,” Song said.

“When we choreograph our dances every year, we have a limitless supply of ideas. If more people can understand this culture, it will make America a much more diverse place.”

Wei said China has a long history of appreciating education. “For thousands of years, scholars valued Confucian teachings. You had to educate yourself in order to become a gentleman or a lady, a noblewoman. Having a good education showed that you took care of yourself,” she said.

She said the current education system in China puts too much pressure on young people. They work for scores and to beat the next person. “You have to come out on top.” She said when Chinese move to America, “they are already used to working very hard, and they naturally excel.”

According to the Asian/Pacific American Heritage Month website, May was chosen to commemorate Asian Americans because it marks the completion of the transcontinental railroad on May 10, 1869. “The majority of the workers who laid the tracks were Chinese immigrants,” it says.