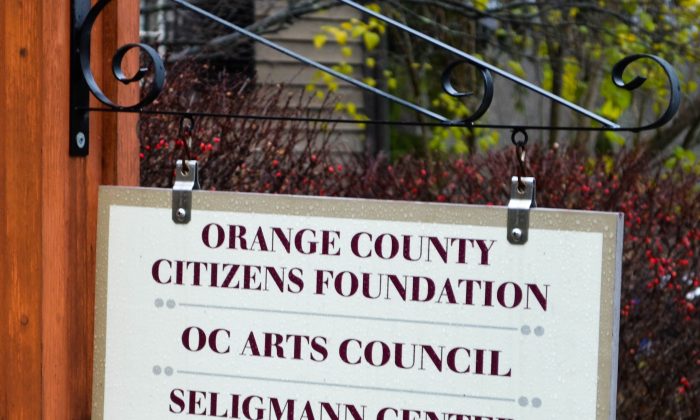 Arts Council Wants Art to be Part of Everyday Life

SUGAR LOAF—The Orange County Arts Council is working to better the quality of life in Orange County with events ranging from a 5K run to its annual arts awards. A few days after the Council’s annual Arts Awards Dinner on Nov. 12 Epoch Times had the opportunity to talk with executive director Dawn Asbro about the work of the Council.

Asbro said this is the Council’s eighth year of promoting the arts in Orange County. She said she wants the arts to be different than your grandmother’s fine china that comes out twice a year and then is forgotten. She would like the arts to be viewed “like your everyday cutlery, things that are a part of your life every day.”

The arts awards dinner put the spotlight on artists, arts organizations, and arts backers at a 1930s, Hollywood-themed event at the Umbra Sound Stage in Newburgh. It drew about 250 to 300 attendees.

The event is a fundraiser for the arts council and an opportunity to recognize people who are doing great work in the arts. Asbro said the categories cover a broad spectrum of the arts from healthcare organizations who use art to heal to influential patrons of the arts.

The Middletown Parks Rehabilitation and Health Center, the winner of the Arts in Healthcare Champion, took its cue from last year’s awardee Elant in providing workshops in the arts for residents by artists at the Goshen Art League. In the Center’s Alzheimers and Dementia unit, elevators and emergency doors are painted to distract patients who might want to wander off. “Their minds are otherwise engaged,” Asbro said. The nonprofit hangs artworks in hallways.

A special honor went to Rayanne Rysinger as an inspirational artist. After an operation to remove a brain tumor left Rysinger paralyzed, she used many arts to forge a useful and satisfying life. Now in her twenties, Rysinger dances to help with flexibility and movement, writes music, and takes photos.

The Champion of the Arts category recognized Barry Plaxen who publishes a monthly arts newspaper, D&H Canvas. Asbro said he attends every arts event and knows every arts organization in the area. He has created a much-needed media outlet for the arts in Orange County.

Individual honors went to John Talbot for lifetime achievement. At the other end of the spectrum, Camille Capello wont youth with exceptional promise. She intends to continue a career in the performing arts in college. Asbro says as the arts council became involved in other ways of connecting with the arts, new categories were born.

Fine art has become a major business in the county and the council thinks that’s great. “Our job really is to find those connections, not only for the artist individually, but also for the arts as an industry here in the county,” Asbro said.

Large companies engaged in producing artistic creations support local economies and provide jobs for residents. These businesses sell to markets outside the county, so people are not aware of them, Asbro said. “You seldom find them as part of the local chamber of commerce groups. They are much broader based.”

The county can boast of some companies not known locally but that have a national reputation—Costume Armour in Cornwall, Production Resource Group in New Windsor, and Polich-Tallix in Rock Tavern. “These are genuine for-profit, art-based businesses here that are sort of under the radar.”

Polich-Tallix Fine Arts Foundry, the largest foundry in the United States, creates large artworks commissioned by artists and organizations. Led by its 82-year-old founder and metallurgist Dick Polich, the company turns a concept into models and digitals files. From there they create bronze, steel, aluminum, iron, and silver works of art that may not have even been seen by the artist. According to its website, artists the foundry has worked with include: Tom Otterness, Janine Antoni, Cleve Gray, Nancy Graves, Jeff Koons, Roy Lichtenstein, Isamu Noguchi, Rona Pondick, Martin Puryear, Joel Shapiro, and Frank Stella.

The company has completed memorials such as the Korean War memorial in Washington DC, a statue of baseball great Robert Clemente in Newark, and the Frederick Douglass memorial in Central Park.

Production Resource Group does staging and rigging for large-scale events such as the Olympics or awards productions. They can produce corporate, association, and automotive events, live music tours and festivals, and installations at theme parks and performing arts centers.

According to PRG’s website, it has a team of 120 scenic craftsmen, project managers, mechanical, electrical and scenic designers, engineers, automation fabricators, technicians, and show operators. Its facility is able to design and fabricate scenery, custom and standard machinery, and automated effects for any show.

Working with the Disney company, Costume Armour produced the helmets for the stormtroopers in the latest Star Wars movie. The company produces authentic theatrical armor, according to its website.  They stock armor and weaponry for Broadway, Disney, operas, movies, and television.

Asbro sees the arts as magnets, for outsiders as well as locals, that draw people into the county and add to the region’s quality of life. “Life has to be about more than just working and eating and sleeping. There has to be more to it,” Asbro says, and the arts fill that void. She says the arts in Orange County make this “a really wonderful place to be and a great place to live.”

The arts council will be celebrating its tenth anniversary in 2017 and two projects are in the works. The group is putting out feelers to municipalities for public art. “The more we can do to put the arts out there and have them be a part of everyday life, the more it will start to be integrated into what we do every day.”

The council is also talking about a Color Run, which Asbro calls a noncompetitive 5K race, “a fun event.” Runners wear white clothing at the start and throughout the race are doused with nontoxic powders in various colors. “By the time they get to the finish line, you’ve got all of these beautiful clouds of color.”

Asbro has always dabbled in the arts, dance lessons, art classes. She got a degree in fashion design at Marist, then took a detour in the corporate world before returning to the arts council, “where my heart was.” She has been executive director for the past four years.

Orange County has so much going for it, Asbro says, and the arts council intends to promote it all. “It’s a wonderful place to create. What we are trying to do is remind people that it’s right here in your own backyard.”