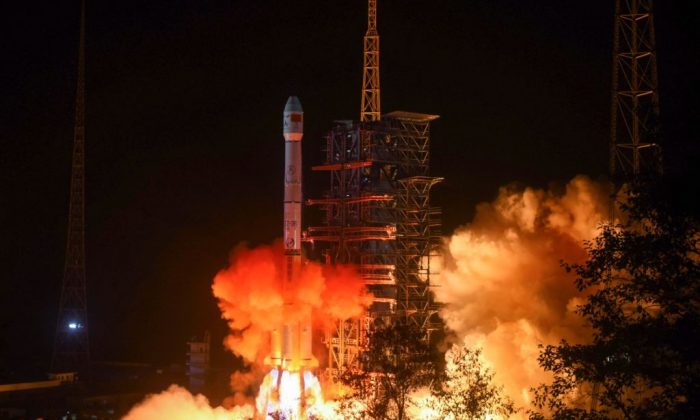 A Long March 3B rocket lifts off from the Xichang launch center in Xichang in China's southwestern Sichuan Province early on Dec. 8, 2018. (STR/AFP/Getty Images)
Americas

BUENOS AIRES—Argentine legislators are discussing a new law to boost oversight of a Chinese space tracking station that has stirred unease among local residents, fueled conspiracy theories and sparked concerns amongst critics about its true intent.

Six lawmakers, including the Senate majority leader, submitted a bill proposing the creation of a commission “for monitoring the cooperation agreement” with the Chinese regime related to China’s lunar exploration program.

The law, dated March 25, was referred to in a list of proposed bills on the Senate’s official website, though the full text of the bill was not publicly available.

Miguel Ángel Pichetto, the majority leader, said in a post on his official Twitter account that he had presented the bill to create a commission to control the space tracking station, run by the Chinese military, located in the central province of Neuquén in Patagonia.

He added that the proposed team would include seven members from the Senate and seven from the Chamber of Deputies, the two houses of Argentina’s National Congress.

The station’s stated aim is peaceful space observation and exploration and, according to Chinese media, it played a key role in China’s landing of a spacecraft on the dark side of the moon in January.

Argentina’s space agency CONAE did not respond to requests for comment. The agency has previously said the agreement between the two countries stated a commitment to “peaceful use” of the project.

The Chinese embassy did not respond to a request for comment.

China’s space program is run by the People’s Liberation Army. The Patagonian station is managed by the China Satellite Launch and Tracking Control General (CLTC), which reports to the PLA’s Strategic Support Force.

Argentina’s Congress debated the space station in 2015, during the presidency of Cristina Fernandez. Opposition lawmakers questioned why there was no stipulation it only be for civilian use, but Congress nevertheless approved the deal.

The station, about a 40 minutes’ drive from Las Lajas, became operational in April last year. Thirty Chinese employees work and live on site, which employs no locals, Maria Espinosa, the mayor of the town of 7,000 people, previously told Reuters.