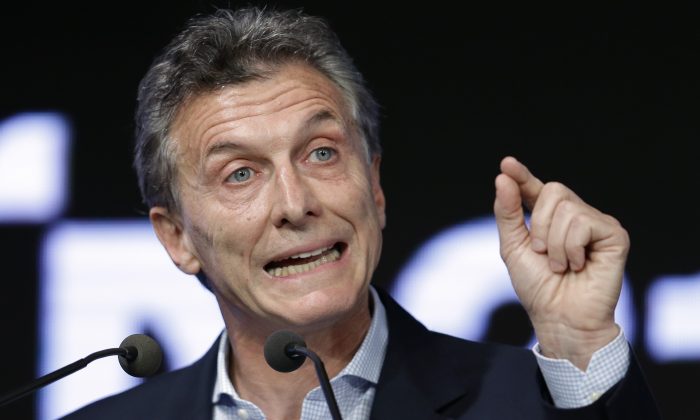 Argentina's President Mauricio Macri speaks during a meeting with the Argentine Industrial Union in Buenos Aires, Argentina, on Dec. 14, 2015. Macri is vowing to crack down on drug trafficking amid a national manhunt for three escaped prisoners convicted in drug-related killings. On Monday, Jan. 4, 2016, Macri accused the previous administration of President Cristina Fernandez of allowing drug trafficking to increase. (AP Photo/Victor R. Caivano)
Americas

Macri’s comments were his first about the Dec. 26 escape that has shocked Argentines—and a sign that the new administration has decided it can longer treat it as a local issue, as top officials initially did in the days after the prison break.

Macri, who assumed office Dec. 10, cast the situation as a sign that drug trafficking had run amok, to the point that drug bosses could pull strings to get people out of jail.

“We are committed. We will not look away. We are going to take this on with all our strength,” Macri said during an event with Maria Eugenia Vidal, the governor of the Buenos Aires province who has come under pressure since the men escaped.

Victor Schialli and brothers Martin and Cristian Lanatta broke out of the General Alvear prison in Buenos Aires province the day after Christmas and have been on the run ever since.

The three were convicted in 2008 of killing three men allegedly connected to an ephedrine trafficking ring. Last week, authorities said the men engaged in a shootout with police who were closing in. One officer was injured and the men got away.

The escape has led to a blame game between officials in the previous and current government and an investigation of prison personnel. It has also put a spotlight on drugs in the South American nation.

Macri, who ran on promises to overhaul the economy and improve government transparency, accused the previous administration of President Cristina Fernandez of allowing drug trafficking to increase.

“We all know that, unfortunately, (drug trafficking) has increased more than ever in our country because of inaction, incompetency or complicity of the previous government,” he said.

While there is no reliable data on drug trafficking, the issue is increasingly on the minds of Argentines, many of whom complain of drug violence in their neighborhoods. In December, a local journalist’s wife was attacked by assailants who warned him to stop reporting on drugs. And Pope Francis, a native Argentine, last year lamented what he termed the “Mexicanization” of Argentina.

It’s unclear if the escapees had help from the outside as an investigation has just begun. However, a lack of facts hasn’t stopped speculation.

One person who has come under scrutiny is Anibal Fernandez, the former Cabinet chief under Fernandez who lost the election against Vidal for the Buenos Aires governorship.

In the middle of the campaign last year, one of the three convicts claimed Fernandez was the mastermind of the killings. The claim was made during an interview on the “Journalism for All” program, which is owned by the Grupo Clarin, a media conglomerate that was frequently at odds with the previous government. Fernandez rejected the accusations, which prosecutors declined to pursue.

Since the escape, Fernandez has repeatedly said he had nothing to do with it while blaming the new government.