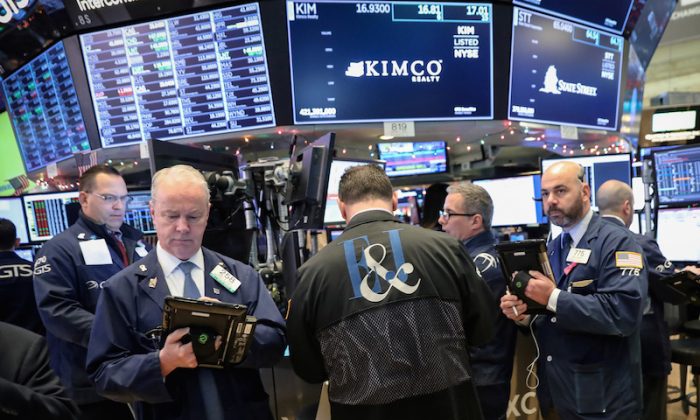 Traders work on the floor of the New York Stock Exchange (NYSE) in New York, on Dec. 10, 2018. (Brendan McDermid/Reuters)
Investment

Wall Street fell for a fourth straight day on Dec. 10, sending the S&P 500 to an eight-month low, with banks, energy and health stocks leading losses on mounting worries over global growth, the U.S.-China trade war and uncertainty over Brexit.

But the S&P and Dow Industrials, which have already lost all their gains for the year in a 4.5 percent slide last week, came off their session lows. The bounce came as Apple’s shares sharply cut their losses, which also helped the Nasdaq reverse course and post slight gains.

Markets have been dogged by signs of cooling global growth, concerns over interest rates and worries that escalating tensions between the United States and China could scuttle a fragile trade truce.

“You have political tensions with China, the potential for slowing global growth, and other geopolitical tensions, that continue to weigh on the markets,” said Charlie Ripley, senior investment strategist for Allianz Investment Management in Minneapolis.

Eight of the 11 major S&P sectors were lower. The biggest drag was a 1.85 percent drop in financials as U.S. Treasury yields dropped further on worries over U.S.-China trade conflict and the Brexit turmoil.

British Prime Minister Theresa May said she was delaying a planned vote in parliament on her Brexit deal as it was set to be rejected “by a significant margin”.

“If the Fed is slowing, that means economic activity is below normal and that can negatively impact earnings,” said Paul Nolte, portfolio manager at Kingsview Asset Management in Chicago.

Apple Inc. was trading slightly higher, having erased its losses after Qualcomm Inc. said it had won a preliminary order from a Chinese court banning the import and sale of several iPhone models in China due to patent violations.