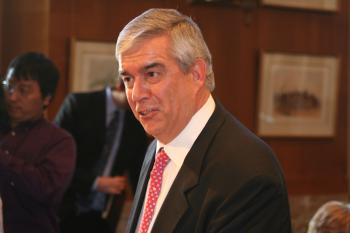 Appearance of a Legal System in China Misleading, Says Commission

WASHINGTON—China gives the appearance of a modern state, with a comprehensive judicial system and code of laws. In reality, China experts agree that respect for the rule of law and individual rights common in democracies takes a backseat to other state priorities. Still, the Chinese regime must have answers to international inquiries about how China is addressing, for example, climate change, environmental protection, and the recent Tibetan and Uyghur protests.

To access how China’s legal system and human rights protections are evolving, the Congressional-Executive Commission on China (CECC) asked a group of experts to assess the current state of human rights and the rule of law.

“In its 2009 report, the [CECC] Commission expressed deep concerns about the continual human rights abuses and the stalled rule of law development,” said Senator Byron L. Dorgan (D-ND), Co-Chairman of the Commission, in his opening statement. The 2009 annual CECC report is scheduled for an Internet release on Oct. 13.

“Mr. Chairman, I am afraid that what we have seen in China is not the emergence of rule of law but rule by law. All of China’s developing legal structures, regulatory institutions, bureaucratic agencies, don’t amount to real law, since the communist party and the government aren’t subject to them,” said ranking member Rep. Chris Smith (R-NJ).

Senator Dorgan said it is in the interest of the U.S. as well as Chinese citizens for the China’s regime to cease repressing free expression and the rule of law. “The harassment of whistle blowers and the suppression of criticism and dissent remove internal checks against environmental damage and hurt not only Chinese citizens but have a global impact as well.”

“To maximize progress on food safety, product quality, even clean air, the Chinese government must engage as allies environmental whistle blowers, watchdog press, the NGOs, Human Rights lawyers, and they cannot be repressed as enemies of the state,” said Sen. Dorgan.

John Kamm, founder, chairman and executive director of Dui Hua (“dialogue”) Foundation, provided the Commission an update on political prisoners. Mr. Kamm has had business ties with Hong Kong and the mainland since the 1970s, and over that period, he cultivated friendships with some Chinese officials. Since May 1990, he says he has made inquiries on the status of more than one thousand prisoners and has received written responses on over half of them. Unfortunately, in 2005, China’s Ministry of Justice stopped providing information on Dui Hua’s list. And for more than two years, Dui Hua’s website has been blocked.

However, this past year, Mr. Kamm found another way, chiefly from local sources in various provinces and municipalities to obtain prisoner information. The Ministry of Foreign Affairs has also begun to provide response to queries on lists of prisoners.
The latest information that Kamm has obtained were on the June Fourth prisoners, that is, prisoners who were sentenced for their involvement in the Tiananmen protests in 1989 (that resulted in the deaths of thousands when the People’s Liberation Army attacked the protesters).

“…there are about 20 prisoners still serving sentences or otherwise detained at least in part because of the spring 1989 protests,” said Kamm. He said these prisoners were held in Beijing, but that there may be others in the provinces.

Special pardons to mark the Beijing Olympic Games or the 60th anniversary of the founding of the PRC were granted to some by the provinces, but not by Beijing. Some of those who benefited were probably political prisoners: June Fourth prisoners and a subgroup, the “counterrevolutionary” prisoners who received life sentences in the 1980s. Labor activist and dissident Jiang Cunde is one of these sentenced for counterrevolution; like many June Fourth prisoners, Jiang suffers from mental illness.

Kamm said that what we would call “political” or “religious” prisoners receive sentence reductions of 50 percent lower rate than other prisoners. These are prisoners who were sentenced for either “endangering state security” (ESS) or accused of belonging to a cult.

There has been a change in the status of lawyers towards more independence, according to Donald Clarke, a specialist in Chinese law. In the past, lawyers were treated as “state legal workers” but now the regime regards them to be “simply commercial suppliers of a service.” However, the shift does not mean lawyers can practice as they do in Western countries.

“[The state] exercises tight control over lawyer’s association and imposes special duties on lawyers to promote the state’s interest even when it might be at the expense of their clients,” said Clarke. One well known example of state interference in the normal relationship between a defendant and counsel was a rule issued regarding the 1989 Tiananmen protesters. It directed the lawyer to pressure the defendant to admit to the crime, for instance, of “counterrevolutionary rebellion” and submit to the law.

More specifically, Clarke testified that the conditions for lawyers who get involved in “sensitive” cases, for example, Falun Gong, Tibet, land takings, environmental protests, or challenging directly or indirectly a leader, “has worsened in the last six months.”

Clarke described the suspension of the Beijing law firm Yitong, which has taken on several controversial cases, representing Hu Jia (the HIV/AIDS activist) and Chen Guangcheng, the blind self-trained lawyer, who exposed forced abortions and illegal sterilizations in his native Shandong province. Also, several Yitong lawyers challenged the leadership of the Beijing Lawyers Association (BLA). Some lawyers called for the direct election of the leaders of the BLA.

Yitong was shut down for six months, although it managed to re-open last month with fewer lawyers and its ability to function had “been greatly impaired,” said Clarke. The lesson drawn from this punishment was undoubtedly not lost on China’s potential activist lawyers, opined Clarke. Several layers involved in the BLA challenge, which failed, had their licenses to practice law taken away.

Very worrisome is the announcement last July by the body in charge of licensing lawyers in Beijing that 53 lawyers’ licenses were canceled because they failed to register as members of the Beijing Lawyers Association. Other pretexts were also contrived to disbar lawyers on a large scale. Prominent lawyers who lost their licenses mentioned by Clarke were Jiang Tianyong, Li Heping and Teng Biao.

Lawyers may have to get approval to accept a major or important case and are even told how to handle it. In 2006, a nation-wide regulation was issued that requires lawyers to report to local authorities cases that are multi-party litigation (cases with more than ten plaintiffs) and accept the state guidance and supervision, said Clarke.

In 2008, dozens of lawyers volunteered to represent plaintiffs in the Sanlu scandal (melamine-tainted milk resulted in four children’s deaths and over 50,000 suffering kidney damage), but the state warned lawyers to stay away from the case, according to Clarke.

China needs to enforce its many environmental laws and regulations

China’s communist leaders know that they have to do something about China’s deplorable environment because it is limiting opportunities for economic growth, causing mounting health problems, and it “has become one of the leading sources of social unrest throughout the country,” said Elizabeth Economy, C.V. Starr Senior Fellow and Director for Asia Studies, Council on Foreign Relations.

The worsening air and water pollution may explain the dramatic increase in cancer victims—roughly 20 percent since 2005, based on PRC official statistics. “Over half of the country’s population drinks contaminated water on a daily basis,” said Economy.

The number of environmental protests exceeded 50,000 in 2005, according to Minister of Environmental Protection, said Economy. “These protests can range from 100 farmers blocking a road to 30,000 protesting anew chemical factory in Sichuan that would cause miscarriages of young women in the villages,” said Economy at the hearing.

The Communist Party has allowed the emergence of 3,000 environmental non-government organizations (NGOs) for their expertise and to bring transparency to environmental problems. The media too is sometimes allowed to a play a watchdog role.

However, “China’s leaders fear the potential that the environment might become a lightning rod for a broader push for political reform,” said Economy. Therefore, these NGOs are subjected to severe restrictions and are closely monitored. Many of China’s prominent environmentalists are being harassed and/or jailed, such as Wu Lihong, Yu Xiaogang, and Tan Kai, to name three.

Gardner Bovingdon, Assistant Professor, Indiana University and the author of The Uyghurs: Strangers in Their Own Land (published Spring 2010), extended the discussion of human rights to the Xinjiang Province in NW China, where there were riots beginning July 5, when Uyghurs began a protest which they said was peaceful. Professor Bovingdon said that Chinese authorities justified shutting down the internet, cutting off various text messaging services and cell phone service to bring about riot control and prevent violence from spreading.

But China’s explanation is doubtful, according to Dr. Bovingdon. He confirmed on the morning of the hearing that major news websites in Xinjiang were still not accessible after an elapse of more than 3 months. He asserted that this shutting down is a violation of the Universal Declaration of Human Rights.

The Congressional-Executive Commission on China was established in October 2001 with the legislative mandate to monitor human rights and the development of the rule of law in China. The Commission is also tasked to maintain a database of information on Chinese prisoners.