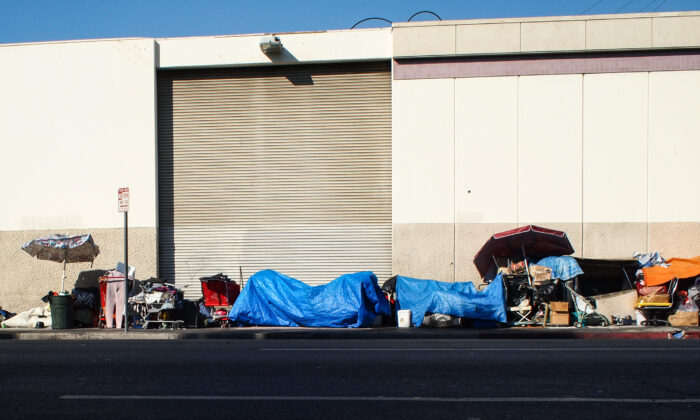 A federal judge’s order requiring local governments to house the homeless on Skid Row in Downtown Los Angeles was unanimously overturned by a federal appeals court on Sept. 23; the case was sent back to the lower court for proceedings.

The Los Angeles Alliance for Human Rights, a group of stakeholders and residents, sued Los Angeles County last year in an attempt to get the county and the city to house its homeless population. Daniel Conway of Los Angeles Alliance said the organization brought the suit to challenge the local government to step up on the homeless issue.

“The [city council] is convinced it’s an unsolvable crisis, and it’s reflected in the policies they enact,” Conway told The Epoch Times in a previous interview. “We’re missing a true partnership between county and city,” Conway said.

In April, U.S. District Judge David O. Carter issued an order requiring the city to offer shelter or housing to every homeless person and clear all encampments on Skid Row by October, as well as a $1 billion escrow to address the homelessness crisis.

On Sept. 23, a three-judge panel on the U.S. 9th Circuit Court of Appeals ruled that the district court “abused its discretion” and failed to follow basic legal requirements. Judge Jacqueline H. Nguyen, who was appointed by former President Barack Obama, stated in the ruling that the plaintiffs who sued the city and county of Los Angeles had no legal right to bring the case.

In addition, the ruling found that Carter’s order was based on a belief that systemic racism was the source of Los Angeles’s homeless issue.

“Through redlining, containment, eminent domain, exclusionary zoning, and gentrification—designed to segregate and disenfranchise communities of color—the City and County of Los Angeles created a legacy of entrenched structural racism,” Carter’s order in April stated. “As shown most clearly in the present crisis of homelessness, the effects of structural racism continue to threaten the lives of people of color in Los Angeles.”

The 9th circuit ruling, however, stated that the district court granted relief based on claims that the plaintiffs didn’t include in their initial complaint.

“The district court granted relief based on claims that Plaintiffs did not allege, supported by novel legal theories that Plaintiffs did not argue, or against Defendants against whom the claim was not pled,” Nguyen wrote in the ruling. “In doing so, the district court abused its discretion because it only had equitable power to grant relief on ‘the merits of the case or controversy before it,’ and ‘does not have the authority to issue an injunction … based on claims not pled in the complaint.’”

According to Nguyen, because Los Angeles Alliance didn’t provide sufficient evidence to establish the standing, the district court “impermissibly resorted to independent research and extra-record evidence.”

Conway said in a Sept. 23 statement on behalf of the Los Angeles Alliance, “We are pleased to see that the 9th Circuit has identified a pathway to hold the City and County accountable for their failed response to L.A.’s homelessness crisis.

“The court issued a narrow ruling this morning focused on procedural steps in the case but not the underlying law. We are greatly encouraged because the issues identified can be quickly addressed and we look forward to returning to Judge Carter’s courtroom in the coming weeks.”

City Councilman Mark Ridley-Thomas, who also serves as the Los Angeles City Council chair of Homelessness and Poverty Committee, highlighted the city’s efforts to provide housing for the homeless in response to the panel’s decision.

“You don’t solve homelessness in a courtroom, you solve it on the streets,” Ridley-Thomas said. “Last week, we unanimously adopted a Citywide Street Engagement Strategy, increasing our investment in dedicated street engagement teams that will connect our unhoused neighbors to housing and services. On Tuesday, the Council took the first step to establish a ‘Housing Now Fund,’ which proposes to fund 10,000 additional rental subsidies and intensive services for unhoused individuals with complex medical and behavioral health needs. In partnership with the County—not the courts—we can and should make housing a right, not a privilege.”