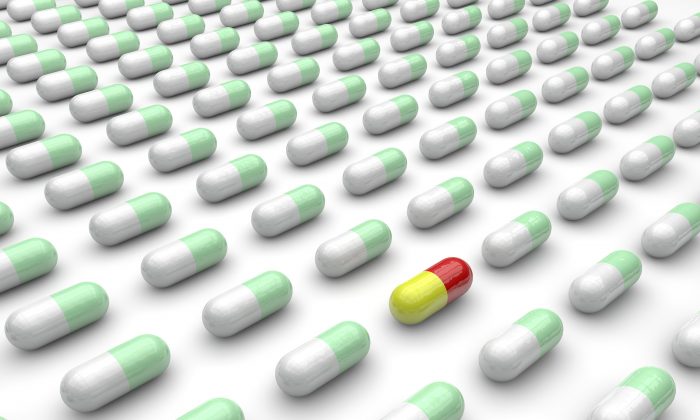 "The evidence for non-pharmaceutical approaches to the behavior problems often seen in dementia is better than the evidence for antipsychotics, and far better than for other classes of medication," says Helen C. Kales.(iStock/Thinkstock)
Health News

The World Health Organization (WHO) recently noted that antibiotic overuse is “a problem so serious that it threatens the achievements of modern medicine.”

“A post-antibiotic era, in which common infections and minor injuries can kill, far from being an apocalyptic fantasy, is instead a very real possibility in the 21st century,” states the WHO’s 2014 report on antimicrobial resistance.

Antibiotics were developed to perform what was once believed to be a relatively simple task: to kill harmful bacteria without hurting the human host. However, they were developed before there was much understanding of the immune system, the human microbiome, or environmental ecology.

Since then, antibiotic use has led to several crucial discoveries:

• Most bacteria, viruses, and fungi either innately possess or can acquire the means to resist these drugs and evade their toxic effects.
• A healthy immune system relies upon a diverse ecosystem of the human microbiome, which can be substantially damaged by the use of these drugs.
• Antibiotics are a short-term solution with many long-term problems.

While necessary in some cases, antibiotics are often overused in medicine and dentistry. They are also widely used in agriculture and have become environmental pollutants.

For example, antibiotics have been used to such excess in meat production that residues now saturate regional water tables and permeate the food chains of native wildlife species, found researchers from the University of North Carolina at Chapel Hill.

According to the Food and Drug Administration (FDA), antibiotic use in livestock increased by 16 percent from 2009 to 2012.

In addition to the immediate consequences of pollution, the omnipresence of antibiotic agents in our environment can promote the development of antibiotic-resistant microorganisms, leading to a rise in infectious diseases that are difficult to treat.

According to the Centers for Disease Control (CDC) antibiotic resistance is already “one of the world’s most pressing public health problems.” The medicinal use of antibiotics in cases where they are not needed is also a major concern.

The use of broad-spectrum antibiotics has increased in nearly every age group in recent years, despite warnings by medical experts in organizations like the WHO, the FDA, and the CDC.

In their analysis of national data, researchers from the University of California–San Francisco found that more than 25 percent of broad-spectrum antibiotics between 2007 and 2009 were prescribed “for conditions for which antibiotics are rarely indicated,” such as bronchitis and other respiratory conditions.

They are also often used injudiciously for viral infections of the ears, sinuses, throat, upper respiratory tract, skin, gastrointestinal tract, bladder, and prostate, where they have been shown to offer no advantage over placebo.

In the United States, 95 percent of all childhood ear and respiratory infections are treated with antibiotics. However, there is no clinical basis supporting such routine use, since most cases can resolve without treatment.

“Though AOM [acute otitis media, a type of ear infection,] usually resolves without treatment, it is often treated with antibiotics,” wrote researchers from Australia in a 2009 report.

“Antibiotics are not very useful for most children with AOM,” they concluded after reviewing results from 10 clinical trials of nearly 3,000 children. Treatment with antibiotics showed only a slight benefit compared to no treatment, but also “caused unwanted effects such as diarrhea, stomach pain and rash.”

According to the New England Journal of Medicine, Americans consumed more than 258 million courses of antibiotics in 2010. Most were prescribed in children younger than 10 years of age and adults over 65.

Analysis published in the journal Clinical Infectious Diseases estimated that adverse events related to the routine use of antibiotics were responsible for more than 142,500 emergency department visits a year. Researchers from the University of Southern California also reported that they account for 25 percent of all in-hospital adverse drug reactions in the United States.

Antibiotics are designed to kill bacteria. But they are also capable of causing significant damage to the organs and tissues of the human body.

The use of antibiotics is associated with many consequences. These drugs:

Further research is always called for. It is important to calculate the extent of possible damage and to better understand the exact nature of how these drugs may undermine the health of modern society. But enough is already known to begin to change our practices.

Antibiotics are important medicines, but their use should be curtailed and limited to life-threatening conditions. Routine use of these agents is often harmful and unnecessary.

Many infections may be treated with alternative measures that strengthen immune function, work to balance the microbiome, and don’t harm the environment.