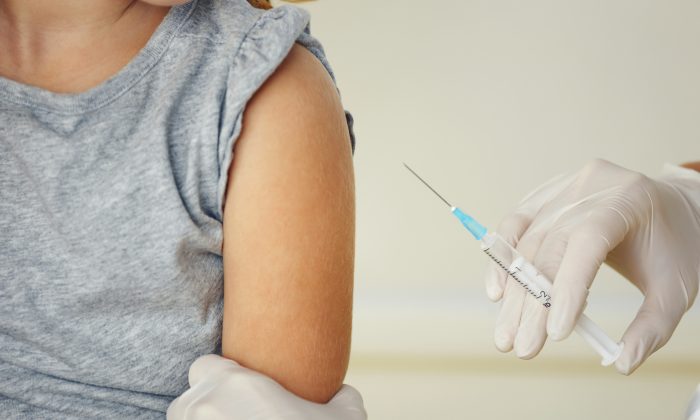 A mother of seven who was against vaccines changed her mind after being stuck in her home with her sick children.

All of the kids came down with whooping cough, a bacterial infection that causes violent, uncontrollable coughing.

The Hills children completed a course of antibiotics and were released from isolation this week.

“I set out to prove that we were right,” Tara Hills told the Washington Post, “and in the process found out how wrong we were.”

The Ottawa, Canada mother wrote in a blog post earlier this year that she and her husband had partially immunized their three oldest kids but opted against it for the other four.

“We stopped because we were scared and didn’t know who to trust,” she wrote. “Was the medical community just paid off puppets of a Big Pharma-Government-Media conspiracy? Were these vaccines even necessary in this day and age? Were we unwittingly doing greater harm than help to our beloved children? So much smoke must mean a fire, so we defaulted to the ‘do nothing and hope nothing bad happens’ position.”

After the Disneyland measles outbreak hit, Hills and her husband wanted to take a fresh look at the evidence surrounding the heated debate over vaccinations. They still did nothing, but when a small measles outbreak hit near their house a few years later, they moved to act.

“I looked again at the science and evidence for community immunity and found myself gripped with a very real sense of personal and social responsibility before God and man. The time had come to make a more fully informed decision than we did 6 years ago. I sat down with our family doctor and we put together a catch-up vaccination schedule for our children,” she said.

Before they could, though, the whooping cough hit the whole family. The disease’s vaccine has been available in Cadnada for 70 years.

Hills said that her family has to live with the consequences of their decisions, and understands other families in their community might be mad at them.

“I want them to know that we tried our best to protect our kids when we were afraid of vaccination and we are doing our best now, for everyone’s sake, by getting them up to date. We can’t take it back … but we can learn from this and help others the same way we have been helped,” she said.

“Vaccination is a serious decision about our personal and public health that can’t be made out of fear, capitulation or following any crowd. No one was more surprised than us to find solid answers that actually laid our fears to rest. I am confident that anyone with questions can find answers. I would only advise them to check your biases, sources and calendar: Time waits for no parent.”

Hills added to CBC that people who are dead-set in opposing anti-vaxxers, as those who decide not to vaccinate their children are called, should not be hostile but helpful.

You can either help those people move one step closer to re-evaluating and making a change, or you can drive them further in their corner where they won’t even listen anymore,” she said.