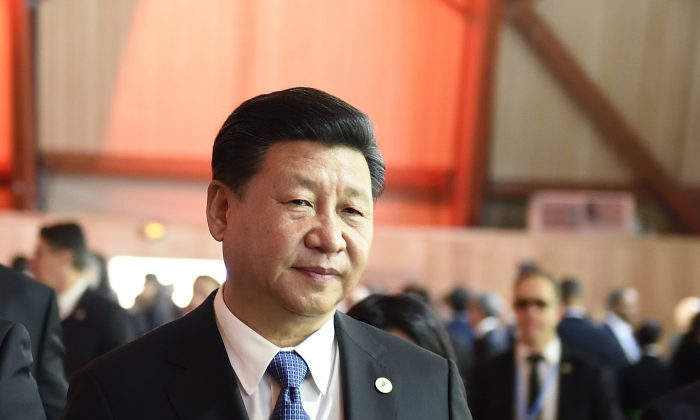 Xi Jinping, leader of the Chinese Communist Party, arrives for the plenary session at the COP 21 United Nations conference on climate change in Paris on Nov. 30, 2015. (Eric Feferberg/AFP/Getty Images)
China

With a free hand, Xi Jinping has opportunity to chart new course
By Larry Ong

In 2015, Chinese Communist Party leader Xi Jinping’s very public efforts to root out corruption in the Party have continued relentlessly.

Foremost, three elite cadres retired from top leadership were expelled from the Party, and one was handed a life sentence. The Party’s internal disciplinary body purged top executives in prominent state-owned enterprises, and doubled the companies to be probed. And for the first time since Xi’s anti-corruption campaign began in 2013, a Party official from every single one of China’s 31 provinces has been investigated.

Xi Jinping is playing for big stakes. His “anti-corruption” campaign is meant to give him a free hand by uprooting the faction loyal to former Party leader Jiang Zemin. In 2016, the big question will be what Xi will choose to do with this freedom.

No Show and Tell

The trial of Zhou, the Chinese regime’s former security czar, had been highly anticipated since he was investigated in July 2014. It thus came as a shock when footage of Zhou wearing a black trench coat, his white-haired head bowed during a closed-door trial, was aired with no prior fanfare on state television in June.

A day after the trial, official and semiofficial media outlets shunted news of Zhou confessing his guilt and being sentenced to life in prison to portions of the front page reserved for the least important headlines.

This was a sharp fall from grace. As head of the regime’s vast security apparatus while also a member of the Politburo Standing Committee (the only Party body with actual power), Zhou had gathered power that rivalled the formal structures of Party central.

The Chinese regime also gave barely any publicity beyond the necessary in announcing the expulsions of Ling Jihua, a former top adviser to Hu Jintao (Xi Jinping’s direct predecessor), and retired Gen. Guo Boxiong, who once held the No. 2 position in the regime’s military.

In the case of Zhou Yongkang, there is a sense that Xi Jinping didn’t want another Bo Xilai—the Chongqing boss with megalomaniac ambitions had showed up for his public trial in August 2013 dressed in business casual, his hair dyed jet black, and proceeded to denounce others for his crimes while denying all charges leveled against him, according to available video footage, incomplete court transcripts, and live reporting from journalists on the popular Chinese microblog Sina Weibo.

But the low-key, business-like manner in which these three elite cadres were dispatched suggests that their fate is preparatory, not Xi’s main goal.

In 2015 Xi’s campaign targeted two key economic sectors in which the faction was heavily entrenched: oil and telecommunications.

The Central Commission for Discipline Inspection (CCDI) picked up where it left off in 2014 in the petroleum sector by investigating two former top oil executives, China National Petroleum Corporation’s Liao Yongyuan and China Petroleum & Chemical Corp.’s Su Shulin. The arrest of Su in October captured much attention because he was then governor of Fujian Province in southern China, a position he had held for five years after spending decades in the state oil industry.

Days after Su’s arrest came the culmination of a two-year-long probe. Jiang Jiemin (no relation to Jiang Zemin), formerly head of the agency that oversees state-owned enterprises and longtime state-oil magnate, was charged with accepting bribes, holding numerous undeclared assets, and abusing power. He was sentenced to 16 years in prison.

The probe into China Unicom began in December 2014 and saw the arrest of two senior executives. Disciplinary inspectors released a scathing report in February that accused the company’s executives of taking sexual favors and bribes, practicing nepotism, and other instances of malfeasance.

In June, a director of a disciplinary inspection team said initial investigations of China Mobile and China Telecom found that their top executives had “formed a parasitic family that hunted and feasted on state assets.” The heads of the three telecom giants were swapped or removed in August, and by Dec. 27, Chang Xiaobing, the chairman of China Telecom, was taken away before an important annual meeting.

This shakeup of the telecom industry has removed top executives linked to Jiang Mianheng, the elder son of Jiang Zemin and the man long believed to be the controlling figure in the industry. Jiang Mianheng himself now appears ready to be taken down.

By purging the oil and telecom sectors and appointing his own men at the helm, Xi Jinping has stripped from Jiang Zemin’s faction enormous sources of wealth and the political power that goes with it.

All Party officials mentioned above are allied with Jiang Zemin, either as close lieutenants or the underlings of associates. The general thrust of Xi Jinping’s Party rectification effort has been towards Jiang’s men.

In building corruption cases against the high ranking figures, the Commission for Discipline Inspection works from the bottom up and the center in, slowly encircling its target. After its extensive march through the Party apparatus, it appears Jiang Zemin himself is now in its crosshairs.

Presently, only the wily Zeng Qinghong, Jiang’s longtime counselor, political enabler, and hatchetman, stands between Xi Jinping and his prize. In the Chinese regime, the shifting of power is often communicated in coded language or actions. There are signs that Zeng is headed for a fall.

In February, the anti-corruption agency published on its website an article that seemed out of place for its deadly serious work in today’s China. The article highlighted the gross misdeeds of Prince Qing, a long-dead Manchu noble.

This sparked fierce speculation among Chinese Internet users and political commentators that Prince Qing is in fact a none too subtle allusion to Zeng Qinghong, in part because the two share a Chinese character in their name.

Also, the recent disappearance of Wang Qishan, the head of the anti-corruption agency, could herald the imminent demise of Zeng Qinghong, analysts said.

Wang is known for spending weeks out of the public spotlight before the purge of elite cadres, as he did in the cases of Zhou Yongkang, Gen. Guo Boxiong, and the late General Xu Caihou. There is no one else of the stature of these three left in Jiang’s camp, other than Zeng.

Jiang Zemin found himself openly challenged this year. In July 1999, Jiang ordered a campaign to eradicate the spiritual discipline of Falun Gong, which resulted in its brutal persecution. In May, Falun Gong practitioners started filing criminal complaints with the regime’s highest courts and prosecuting body accusing Jiang of genocide and crimes against humanity.

Breaking all precedent, the regime’s legal institutions have duly accepted and acknowledged the bulk of the complaints from over 200,000 practitioners. For most of the past 16 years Falun Gong practitioners have not been allowed lawyers to defend them in court, much less to use the courts to press their own claims.

Another challenge was issued by state mouthpiece People’s Daily. An Aug. 10 editorial criticized former Party leaders who were still influencing issues of the day. Many believed that the editorial was alluding to Jiang Zemin, who has constantly meddled in Party affairs since his retirement in 2002.

Ten days after the People’s Daily editorial, a large stone bearing an inscription by Jiang that was displayed prominently outside the Central Party School in Beijing went missing, according to a number of Chinese news publications. Days later, Central Party School said the stone had merely been shifted indoors. Even if that should be the case, this sign of Jiang’s power is no longer visible.

Luo Yu, the son of a founding communist revolutionary who is credited with establishing the regime’s public security apparatus, told the Epoch Times in an interview that Xi may be like the son of Taiwan’s dictator, Chiang Kai-shek. Chiang Ching-kuo ended dictatorship on the island nation and introduced democracy.

Luo knew Xi as a child—their families were very close—and recently wrote an open letter to the Party leader, whom he addresses as “Brother Xi.” Luo calls on Xi to end one-party rule and introduce democracy to China.

In the interview with this paper, Luo said Xi faces obstructions to reform from the Jiang faction, and will only be able to make real, gradual democratic reforms, if he so chooses, once he consolidates power through the anti-corruption campaign and the restructuring of the People’s Liberation Army.

The logical sequel to the events of 2015—the taking down of Jiang’s key allies, the isolation of Jiang Mianheng, the purging of the oil and telecommunications sectors—will be the final uprooting of the Jiang Zemin faction.

If Xi does this, and if he follows Luo’s advice, then 2016 will be a very interesting—and significant—year in China.