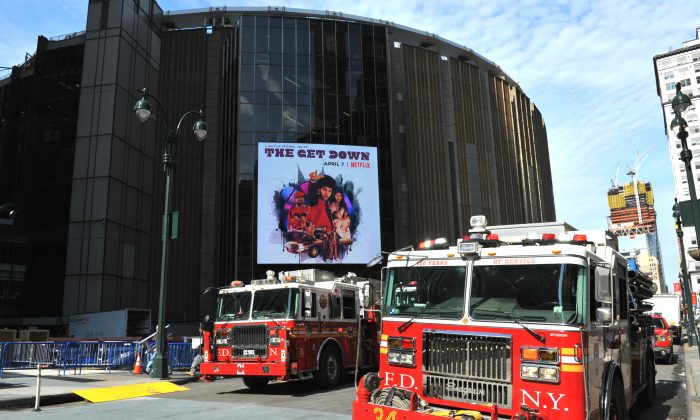 New York City firefighters stand by near Penn Station in New York on April 3, 2017 after responding to a derailment of a NJ Transit train at Penn Station. NJ TRANSIT said all 1,200 passengers on board were offloaded with only 4 minor injuries. (TIMOTHY A. CLARY/AFP/Getty Images
New York

Another Train Derails at New York’s Penn Station, One Injured

NEW YORK—A New Jersey Transit train derailed during rush hour at New York’s Penn Station on Monday, forcing passengers to be evacuated from cars in the second such incident at the Midtown Manhattan hub in less than two weeks, officials and a witness said.

Emergency officials at the scene said one person was injured in the derailment. New Jersey Transit officials said services were suspended into and out of Penn Station.

A Reuters witness on the New Jersey Transit train, which was coming from Trenton, New Jersey, said the train began bumping and shaking before stopping, and that a broken wheel was visible from inside the car.

Passengers were evacuated from the carriages onto the tracks, the Reuters witness said.

Two other recent train crashes have occurred in the New York area. On Jan. 4, more than 100 people were hurt when a Long Island Rail Road train struck a bumper at Atlantic Terminal in Brooklyn.

In September last year, a New Jersey Transit commuter train plowed into the platform at the Hoboken, N.J., station, killing one person and injuring more than 100 others.