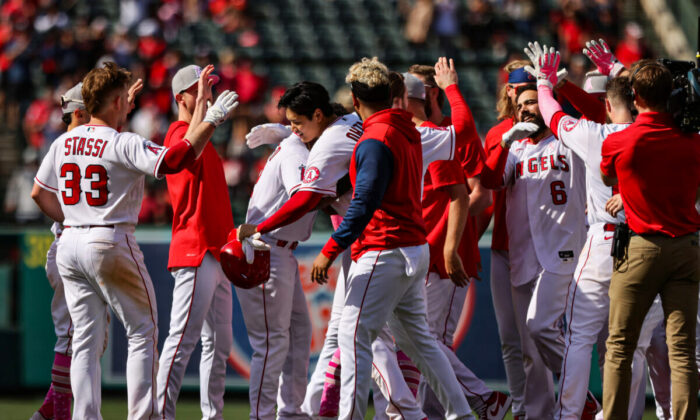 The Los Angeles Angels celebrate a 5-4 win against the Washington Nationals. Shohei Ohtani centered holding helmet, and Anthony Renden #) at Angel Stadium of Anaheim, in Anaheim, on May 8, 2022. (Katharine Lotze/Getty Images)
Baseball

Angels Rally Late Over Nationals With Heroics From Ohtani, Rendon

The Los Angeles Angels won the last game of their three-game series over the Washington Nationals, 5-4, with a late rally led by Shohei Ohtani and Anthony Rendon at home to keep a half game lead in the AL West Division on Sunday.

With little offense on the day, the Angels were down 4–2 ahead of the ninth inning. Pinch-hitter Luis Rengifo then walked after Jack Mayfield was struck out by Washington pitcher Tanner Rainey.

With two men on and two outs, Ohtani doubled off of an 0-1 slider to deep center-field and hitting the wall, scoring Rengifo and Ward to tie the game at 4–4.

Ohtani is batting .235 with four home runs and 16 RBIs for the season as both hitter and pitcher.

“The last couple games, I’ve actually been feeling better,” said Ohtani through interpreter Ippei Mizuhara. “I’ve been getting a better angle on the balls that I’m hitting and they’re going in the air. So I think in a few more days, I should be able to get there.”

Rendon then hit a single to left-center off of a 1-0 fastball that provided Ohtani an attempt to score from second. He successfully slid into home plate, just beating the tag by Nationals catcher Riley Adams.

“I was just thinking about getting home,” added Ohtani. “But I felt with the way the ball landed, I knew I was going to be able to score.”

It was Rendon’s fourth career walk-off hit, but his first with the Angels. He was 0-for-8 in the first two games against his former team, and was with Washington when they won the World Series in 2019.

Rendon has had a slow start this season batting .213 with three homers and 13 RBIs in 26 games.

“I could care less,” said Rendon. “I’ll hit .200 if it means we’re still winning games. Yeah, it’s frustrating, but not many people get to feel what we felt when we won the World Series and were the last team standing. It means a lot more than any personal accomplishment, because this is a team game.”

Pitcher Jaime Barria would be credited with the win, giving the Angels the series edge, with an overall record of 19 wins and 11 losses.

“We’ve been good lately and the boys came through,” Angels manager Joe Maddon said. “Sho, who has struggled, hit that one off the wall. And then Tony squared that one up. I really liked him in that moment and he is definitely going to get some momentum in his system right there.”

The Angels remain home in a three game series versus Tampa Bay beginning Monday May 9th at 6:38 pm PT.