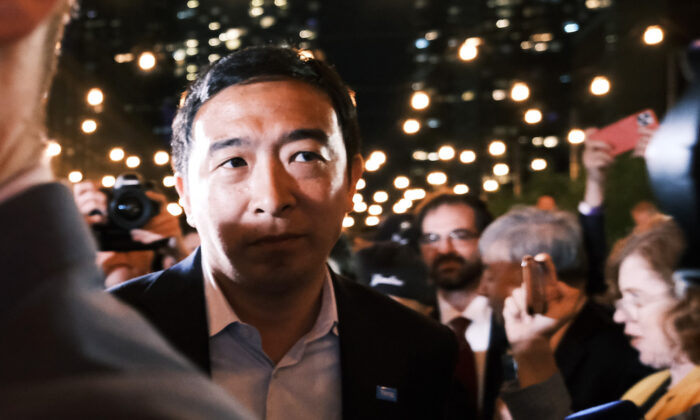 Mayoral candidate Andrew Yang greets supporters at a Manhattan hotel as he concedes in his campaign for mayor in New York City, on June 22, 2021. (Spencer Platt/Getty Images)
NY Politics

“I am a numbers guy,” Yang, 46, told supporters. “And I am not going to be the next mayor of New York city based on upon the numbers that have come in tonight. I am conceding this race.”

He added, “Though we’re not sure ultimately who the next mayor is going to be. But whoever that person is, I will be very happy to work with them.”

Yang was among 13 Democrats seeking the party’s nomination to become New York City’s next mayor.

New Yorkers on Tuesday participated in the first citywide election to be conducted by ranked-choice voting. Voters can rank their top five choices under the new system. If no candidate secures a clear majority—which is more than 50 percent—voters’ subsequent rankings are considered in a process called ranked-choice analysis, where each round eliminates the candidate receiving the fewest votes until two candidates remain, whereby the one with more votes wins.

Eric Adams, the Borough President of Brooklyn, appeared to be the early frontrunner with about 31.7 percent of the votes after polls closed for the first round of voting at 9 p.m. He was followed by civil rights attorney Maya Wiley in second place at about 22.3 percent, former NYC sanitation commissioner Kathryn Garcia in third place at 19.5 percent, and Yang in fourth place at 11.7 percent.

In remarks to supporters late Tuesday, he said, “We know that there’s going to be twos and threes and fours. But there’s something else we know. We know that New York City said, ‘Our first choice is Eric Adams.’”

The winner may not be announced for some time because it is unclear whether Adams would remain in the lead. More than 200,000 absentee ballots still need to be counted, as well as voters’ complete rankings of the candidates.

There are only two Republican candidates in the NYC mayoral race. As such, the ranked-choice voting system is unnecessary. Curtis Sliwa, the founder of the crime prevention non-profit Guardian Angels, won the Republican nomination for mayor, defeating rival Fernando Mateo.