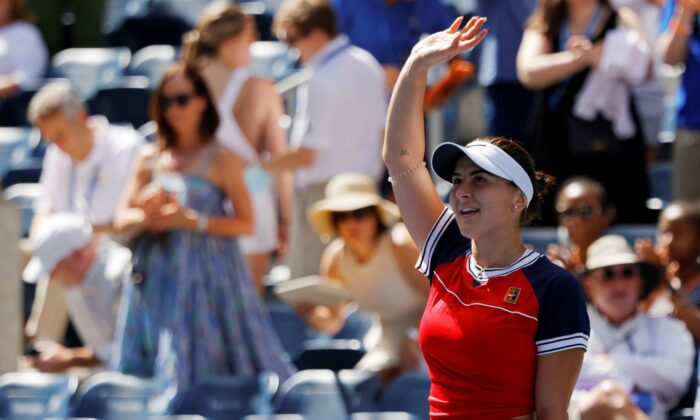 Bianca Andreescu of Canada waves to the crowd after her match against Greet Minnen of Belgium (not pictured) on day six of the 2021 U.S. Open tennis tournament at USTA Billie Jean King National Tennis Center, in Flushing, N.Y., on Sept. 4, 2021. (Geoff Burke-USA TODAY Sports)
Tennis

Andreescu Rolls Through to US Open Fourth Round

NEW YORK—Former U.S. Open champion Bianca Andreescu fired off 21 winners to make quick work of Belgian Greet Minnen 6–1, 6–2 in the third round of the tournament on Saturday.

The 21-year-old Canadian won nearly all of her first-serve points in the first set on Louis Armstrong Stadium with just four unforced errors, two years after she hoisted the trophy.

Andreescu never let Minnen get a foothold in the second set, when she fended off three break points and excelled from the baseline to extend her unbeaten streak at Flushing Meadows to 10–0 in a little over an hour.

The tournament has been a remarkable return to form for the sixth seed, who lost in her first match at Cincinnati last month and failed to get beyond the first round at Wimbledon or Roland Garros.

“I’m very happy with my performance today,” said Andreescu, who missed the 2020 season due to injury and the challenges of playing in the COVID-19 pandemic. “It hasn’t been an easy past couple of months.”

“I’m super grateful to be a part of that group,” said Andreescu.