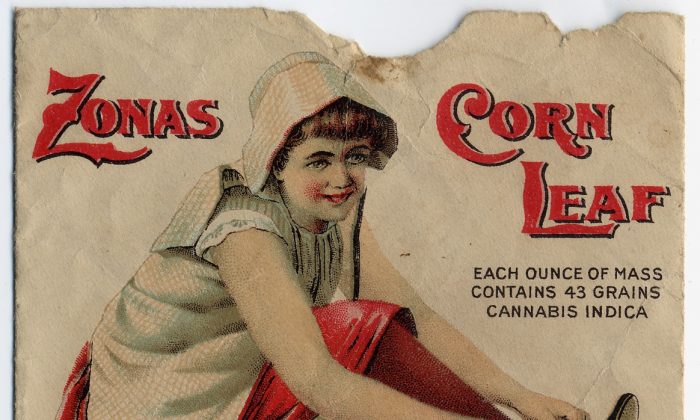 “Disfiguring humors, scrofula, humiliating eruptions, copper-colored diseases of the blood”—we might not be familiar with all of these conditions, yet over 100 years ago consumers who believed themselves to be plagued by such ailments might have resorted to taking a concoction that promised no less than “a positive cure for every form of skin and blood disease,” including hair loss.

The advertisement making this claim is a poster for Cuticura that can be viewed on the Smithsonian’s National Museum of American History’s website. It is part of a collection of approximately 2,000 personal care and beauty products that the museum has been digitizing, so as to make the information accessible online for education and research around the world.

For Man and Beast

There are not many products nowadays that promise to cure man and beast in one fell swoop. Yet during the 19th and 20th centuries, this was not uncommon. S.B. Goff’s Magic Oil Liniment, seen on the front page of the “Cure-alls and Salves” section of the website, claimed to treat (in humans) everything from rheumatism to toothache, earache, stiffness in the joints, sore throat, cholera, piles, and the list goes on. For horses, the list of what it could treat is shorter, yet still promising to be quite efficacious, providing relief from sprains, stiff limbs, colic, gravel, and thrush, among other ailments.

While the collection documents the advances and changes made in health and wellness throughout American history, it is also a record of marketing strategies throughout the decades as well as changing views about body image and beauty ideals. The Smithsonian began collecting pharmaceuticals and medicinal preparations in the 1880s; the vast majority of the cosmetics and personal care collection was acquired beginning in the mid-1960s.

According to Rachel L. Anderson, research and project assistant in the Division of Medicine and Science, the collection is particularly interesting because it reveals more about our perceptions of science and how science has been marketed to consumers, rather than the science behind creating the products.

“When you start with this site, it sounds so unbelievable, but part of that is because we’re not used to some of the language. But when we listen more closely to the advertising for some of our modern-day serums and products, they’re also making some pretty peculiar claims; it’s just that it’s put in language that we’re very used to hearing,” Anderson told the Epoch Times during a telephone interview alongside Diane Wendt, associate curator in the Division of Medicine and Science, discussing the Cosmetics and Personal Care Collections Digitization Project.

The Age of Anti-Aging

One might chuckle at the claims made by so many of the personal care products of the last century and earlier, but let’s not forget that women still spend exorbitant amounts on skin care products that often promise what they cannot deliver. Do these sound familiar: anti-aging, a revitalized complexion, visibly reduced age spots, minimized pores, plumped lips?

According to Anderson, when we read such claims, we get the feeling of what they are expressing while not necessarily being struck by the total unbelievability of the claims, if we’re speaking scientifically of what those words actually mean.

In terms of marketing an ideal of beauty, not much has changed since the 1800s. We use modern products with the same hope that somehow we will achieve the acme of beauty while not damaging our health in the same manner that 19th century women did.

During the 1800s and the 1900s, the ideal of beauty was having a pale, white, Caucasian complexion. Most products claimed to whiten the skin, “so along with the idea of cleansing you also get the idea of whitening,” said Anderson.

She explained the lengths to which women would go to achieve this. With makeup, healthy meant a pale face with rosy cheeks. It was not unusual for women to suffer very ill effects from many of these early skin preparations because of their high lead content, and arsenic was also a popular ingredient.

Nineteenth century and 20th century ladies’ magazines contained recipes for various preparations, and it was customary for women to go to the apothecary and buy hefty amounts of lead powder, which they would mix up themselves to create face-whitening preparations.

In the 1920s and ’30s, there is a sudden shift in color in the products meant for the face. “You see makeup that emulates the look of a tan. This is because screen stars or ethnic stereotypes that are being exoticized are lending some new identities for primarily white women to try on,” Anderson said.

At the same time, there was a radical change in women’s fashion that meant women in the 1920s were revealing their legs and arms, and armpits, for the first time.

Anderson pointed out some of the most fascinating objects in the collection that speak to feminine identity in America, addressing how the feminine body functions and how it has to be kept.

The Schermack round razor is among the first shaving implements for women. It was a safety razor with a tiny circular disposable blade shaped to fit into the hollow of the female armpit.

But other products such as Sozodont—”the most successful patent liquid dentifrice” in the 1870s, according to the site—promised splendid teeth but in reality dissolved tooth enamel with every use.

Damaging dental products continued to be manufactured well into the 20th century until new drug and cosmetic regulations were enacted in the late 1930s. The Smithsonian website notes that in 1931, the Journal of the American Dental Association gave four examples of harmful products and reported on the danger of tooth-cleaning products that all contained hydrochloric acid. Tartaroff was one such product, which had been shown in 1928 to dissolve 3 percent of one’s tooth enamel each time it was used.

A great highlight of the collection is the artwork that advertised some of the products. Along with the information sheets that were sold together with the products, and the labels, the posters offer a complete picture with regard to the particular identity to which a product was targeted. The Smithsonian has a large archival collection of these posters, which are fragile since they are on paper, so the only way of viewing them is online.

So far, 2,200 objects have been digitized through the project that Kiehl’s has been supporting through funding and product donation.

“We gave the museum carte blanche with the current Kiehl’s catalogue, showing them our most iconic formulas … and they selected those they felt were most impactful for their archives,” wrote Chris Salgardo, president of Kiehl’s USA, regarding the project.

The 11 products donated by Kiehl’s include some that are still available for sale, such as the Calendula Herbal Extract Alcohol-Free Toner, the Creamy Eye Treatment with Avocado, Midnight Recovery Concentrate, and Rosa Arctica Youth Regenerating Cream.

Interestingly, many companies such as Kiehl’s still use old-fashioned graphics in their logos as a way of reminding the consumer of the company’s heritage, subliminally lending a unique legitimacy to its products. Of course, in the case of personal care products, the further one goes back in time, the less safe or effective a product is likely to have been.

And just in case we are under the impression that we are a long way from the days of putting lead on our faces in the name of beauty, there is still little involvement of the Food and Drug Administration in cosmeceutical research. In the case of cosmeceuticals (cosmetic and pharmaceutical products with biologically active ingredients purporting to have medical or drug-like benefits), the influence of advertising still trumps the science.

Companies selling these products can see that consumers require extra information to be fully convinced, and have taken it upon themselves to include one line or two (usually just one) touting evidence like that their own tests revealed how 9 out of 10 women who have used the respective product have seen an improvement in the “appearance of wrinkles.”

“To some degree we still believe what we’re told. We’re at a point in time where we believe that if something is truly dangerous, it would not be allowed on the market,” Anderson said. She added that, in many cases, it might take years of scientific study to uncover the side effects of some of the ingredients contained in products that we use today.

According to Associate Curator Diane Wendt, there is a growing concern about ingredients, but that can also be misplaced, and words such as “pure” and “natural” and “clinically proven” are in dire need of more exacting definitions.

The age of information has left us with information overload that obscures the simple facts about a product and its ingredients.

“What is missing is clarity about what ingredients [are contained in a product] and in what amounts we’re getting it that we should pay attention to,” Anderson said at the end of the discussion, which left us chuckling and wondering about the amounts of formaldehyde contained in most nail polishes, or lead in red lipsticks, and also the modern substances that we have been using without knowing their prolonged effects on our health.

And this speaks directly to the fact that since time immemorial, humans have sought various ways to feel attractive. In one word—vanity.