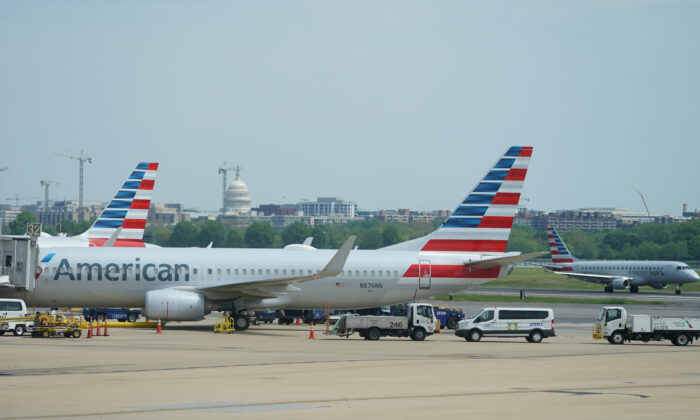 An American Airlines Boeing 737 jet sits at a gate at Washington's Reagan National airport with the U.S. Capitol building in the background on April 29, 2020. (Kevin Lamarque/Reuters)
Companies

American Airlines Group Inc. shares fell 7 percent on Friday as investors looked past the carrier’s upbeat revenue forecast and instead focused on its warning of a hit from higher fuel costs and staffing problems.

A steady surge in fuel prices due to geopolitical tensions and a chronic labor shortage are threatening to upset a nascent recovery in the airline industry.

“There’s going to be cost pressure. And that will, I think, have an impact on regional carriers and other carriers that rely on lower cost labor,” American Airlines Chief Executive Officer Robert Isom said at the Bernstein Strategic Decisions Conference on Friday.

American Airlines said it expected fuel expenses to average between $3.92 and $3.97 per gallon in the second quarter, up from its previous forecast of $3.59 to $3.64 per gallon.

The carrier also said it expected capacity in the quarter to be at the low end of its prior outlook range.

To get more planes in the air and counter job attrition, American Airlines said it was planning to hire 2,000 pilots.

The airline also flagged that it had almost 100 aircraft that were not productive right now.

The Fort-Worth, Texas-based airline said it was expecting revenue for the three months ending June to rise between 11 percent and 13 percent over pre-pandemic levels, compared with its prior view of a 6 percent to 8 percent increase.

That, in turn, should, offset increased costs, it added.

“We’ve never seen a revenue environment like this, led by the domestic leisure business,” Isom said.