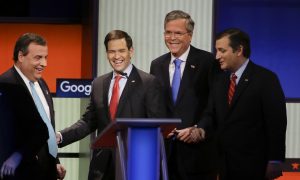 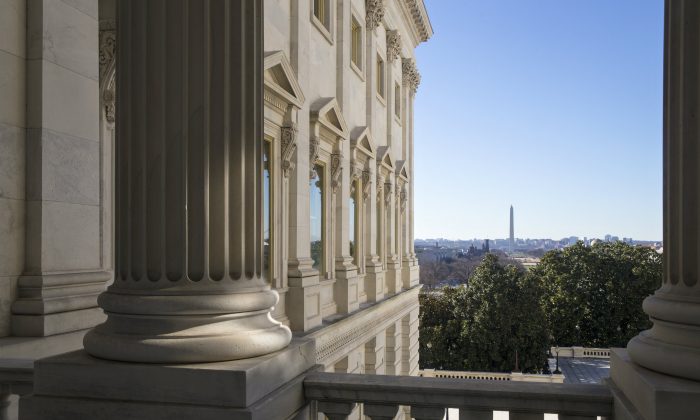 The Washington Monument is seen in the distance from balcony of the House of Representatives on Capitol Hill in Washington, D.C., on Jan. 5, 2016. (AP Photo/J. Scott Applewhite)
Politics

America and Its Politics in Flux as 2016 Voting Begins

DES MOINES, Iowa—First there was the promise of political change in Barack Obama’s historic 2008 election. Then the pledge to upend Washington’s ways after the 2010 tea party wave.

But for some Americans, the change and disruption have come too slowly, or failed altogether. On the eve of the first voting contest in the 2016 presidential election, these voters are pushing for bolder, more uncompromising action, with an intensity that has shaken both the Republican and Democratic establishments.

Candidates named Bush and Clinton—members of America’s elite political families—and others with deep ties to party leadership have been unexpectedly challenged by a billionaire businessman-turned-reality television star, a young senator loathed by GOP leaders, and an unabashed democratic socialist.

“A lot of people feel like the status quo is a machine that’s grinding them down,” said Sen. Claire McCaskill, a Democrat from Missouri. “They are gravitating toward candidates that are disruptive and promising massive change.”

A lot of people feel like the status quo is a machine that’s grinding them down. They are gravitating toward candidates that are disruptive and promising massive change.
— Sen. Claire McCaskill (D-Mo.)

Indeed, the campaigns of Republicans Donald Trump and Ted Cruz, as well as Democrat Bernie Sanders, have been fueled for months by anger, frustration and anxiety over an economic and national security landscape that is undeniably in flux—and a political system some voters believe is unwilling or incapable of meeting new challenges.

Wages have barely budged and the costs for housing, education and health care are soaring. The country is more racially and ethnically diverse than at any point in its history, with census data projecting white Americans will make up less than half the population by mid-century. New terror threats emanating from the Middle East feel both confusing and very close to home.

Monday’s Iowa caucuses will offer the first hard evidence of whether the outsider candidates can turn the energy around their campaigns into votes. Trump and Cruz have been battling for supremacy in Iowa, while Sanders has been cutting into Democratic front-runner Hillary Clinton’s lead.

Sanders, an independent who caucuses with Democrats on Capitol Hill, has spent years railing against the influence of wealthy and corporate interests on American politics. Yet even he says he’s surprised by what’s happening.

“My gut told me that this message would resonate with the American people, but to be honest with you it has resonated stronger and faster than I thought it would,” Sanders told The Associated Press.

My gut told me that this message would resonate with the American people, but to be honest with you it has resonated stronger and faster than I thought it would.
— Sen. Bernie Sander (I-Vt.)

Americans’ worries about the country’s trajectory are not new. For years, surveys have shown a large majority of Americans say the country is headed in the wrong direction.

But that sentiment now appears to be disproportionately driven by frustration with politics and the political system, especially among Republicans.

A recent AP-GfK poll showed that among the 74 percent of Americans with a negative view of the country’s direction, 51 percent of Republicans and 38 percent of Democrats listed at least one political reason for their negative outlook—far more than listed an economic or foreign policy-related reason.

No candidate has tapped into the public’s disillusionment with politics better than Trump.

The real estate mogul’s controversial comments about Mexicans, Muslims and women are seen by his supporters as a welcome change from most candidates’ careful political correctness. He’s also eschewed most of the trappings of modern presidential campaigns, including super PACs and other high-dollar fundraising, which has only strengthened his appeal with voters who distrust career politicians.

“It’s harder and harder to believe in an establishment guy who’s so polished,” said Wayne Magoon, a 72-year-old from Exeter, New Hampshire, who described himself as a lifelong Republican. “I don’t vote for establishment guys who are too glossy.”

Cruz has tapped into a similar anti-establishment sentiment. Despite being in the Senate, Cruz is loathed by most GOP leaders and has aligned himself with Republicans who believe party elites made lofty promises to win the House in 2010 and the Senate in 2014, then ignored the will of the voters who drove those victories.

“Republicans get to Washington and become part of Washington,” said Brendan O’Brien, 51, of Portsmouth, New Hampshire.

There’s still uncertainty in some Republican circles about whether Trump can turn his legion of fans into voters, or whether Cruz can overcome a wall of opposition from party leaders eager to block his path to the nomination.

Yet there’s just as much uncertainty about what it will take to top them.

After all, a combined $129 million in television and radio advertising by the campaigns and outside groups backing more mainstream candidates—Florida Sen. Marco Rubio, former Florida Gov. Jeb Bush, Ohio Gov. John Kasich and New Jersey Gov. Chris Christie—hasn’t put any of them in position to win Iowa or New Hampshire. The majority of the money—about $112 million— has come from super PACs, like the Bush-aligned Right to Rise USA, and dark money groups, like the Rubio-supporting Conservative Solutions Project, according to data from the Campaign Media Analysis Group of Kantar Media.

It’s not just Republicans grappling with a disillusioned electorate.

Clinton entered the Democratic race with all of the institutional advantages: broad support within her party’s leadership, a robust donor network and a sophisticated campaign operation. Most Democrats who were seen as potentially tough challengers decided against a run, including Vice President Joe Biden.

But Clinton allies say the front-runner was caught off guard by Sanders’ appeal in the early voting states, where he’s drawing large crowds with his calls for economic equality.

“He reminds me of Franklin Delano Roosevelt,” said Mike Ray, 67, of Clinton, Iowa. “He’s for the people, not for the corporations.”

Even among the Democratic leaders who are backing Clinton, there’s admiration for Sanders’ ability to compete with the former secretary of state.

“I would not have predicted that he got as far,” said Tom Harkin, the longtime Iowa senator who retired last year. “He’s done remarkable. Wow.”

At the heart of the fight between Clinton and Sanders is how much the government should do to ease economic burdens for the middle class.

With U.S. workers hampered by $1.3 trillion in student debt, Sanders wants to make tuition at public colleges and universities free. Clinton wants to lessen the burden of the student loan repayment system and create incentives for institutions to lower costs.

With prescription drug costs soaring 11.4 percent in 2014—more than five times faster than growth in average hourly wages—Clinton wants to cap out-of-pocket drug costs at $250 a month. Sanders wants to change to a single-payer health care system that he says would lower overall health care costs, even including the tax hike to help pay for the program.

McCaskill, the Missouri senator, says Sanders is running on “promises that in his gut he’s got to know can’t be kept.” The Republican establishment makes the same argument about Trump’s proposals to build a wall on the U.S.-Mexico border or block all Muslims from entering the U.S. as a way to combat terrorism.

But all that matters is whether voters believe the candidates’ plans can fly—or whether that factors into their vote at all.

Soon, they’ll have their say.