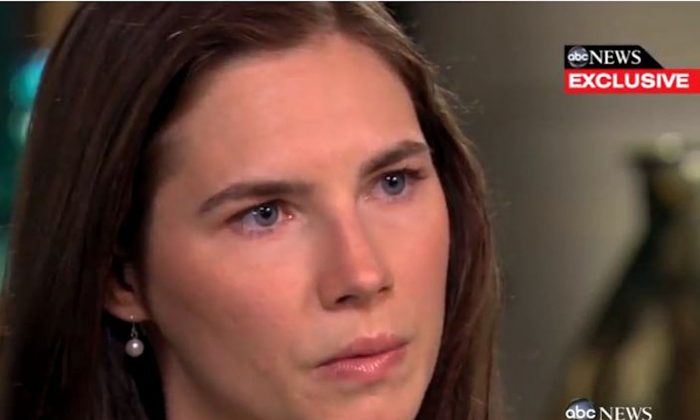 Amanda Knox speaks in an exclusive interview with ABC New's Diane Sawyer on April 30, 2013, the same day her book, "Waiting to be Heard," was released. (Screenshot Via The Epoch Times)
Entertainment

Amanda Knox talked about her time in Italian prison, her reactions to her roommate’s murder—sometimes seen as insensitive—and what life has been like since her acquittal, in an interview with ABC News’ Diane Sawyer on Tuesday night. Knox’s book, Waiting to be Heard, was also released on Tuesday.

Knox, a Seattle native, was studying in Italy when her roommate, Meredith Kercher, was killed in 2007. Knox and her then-boyfriend,  Raffaele Sollecito, were convicted of the murder in 2009 and acquitted in 2011. The acquittal was overturned in March of this year; Knox and Sollecito will face retrial later this year or next year.

The 25-year-old talked to Sawyer about the 1,427 days she spent in an Italian prison: “I had to grow up in prison for something I didn’t do.”

She said she contemplated suicide. She said a prison official would sometimes lock her in his office and say inappropriate things to her. She had panic attacks and started to lose her hair.

Sawyer read from Waiting to be Heard, “I felt as if I were being sealed into a tomb.”

Knox’s reactions to Kercher’s murder struck some people as cold rather than grieving. Knox said, “I think everyone’s reaction to something horrible is different.” She said she went through feelings of shock, disbelief, sadness, anger, and a “stubborn drive to do what I thought an adult would do, which is help.”

Now free, yet facing retrial, she says her life will never be the same. She said she is no longer the light-hearted girl who liked to joke around a lot.

“I was in the court room when they were calling me the devil,” she said of the people attending her trial. She was also not prepared for Kercher’s parents thinking she was the one who murdered their 21-year-old daughter. She expressed sympathy for Kercher’s family.

“I was a murderer, whether I was or not. And I had to live with the idea that that would be my life,” Knox said on ABC.

“I’d like to be reconsidered as a person,” she said. “What happened to me was surreal, but it could have happened to anyone.”