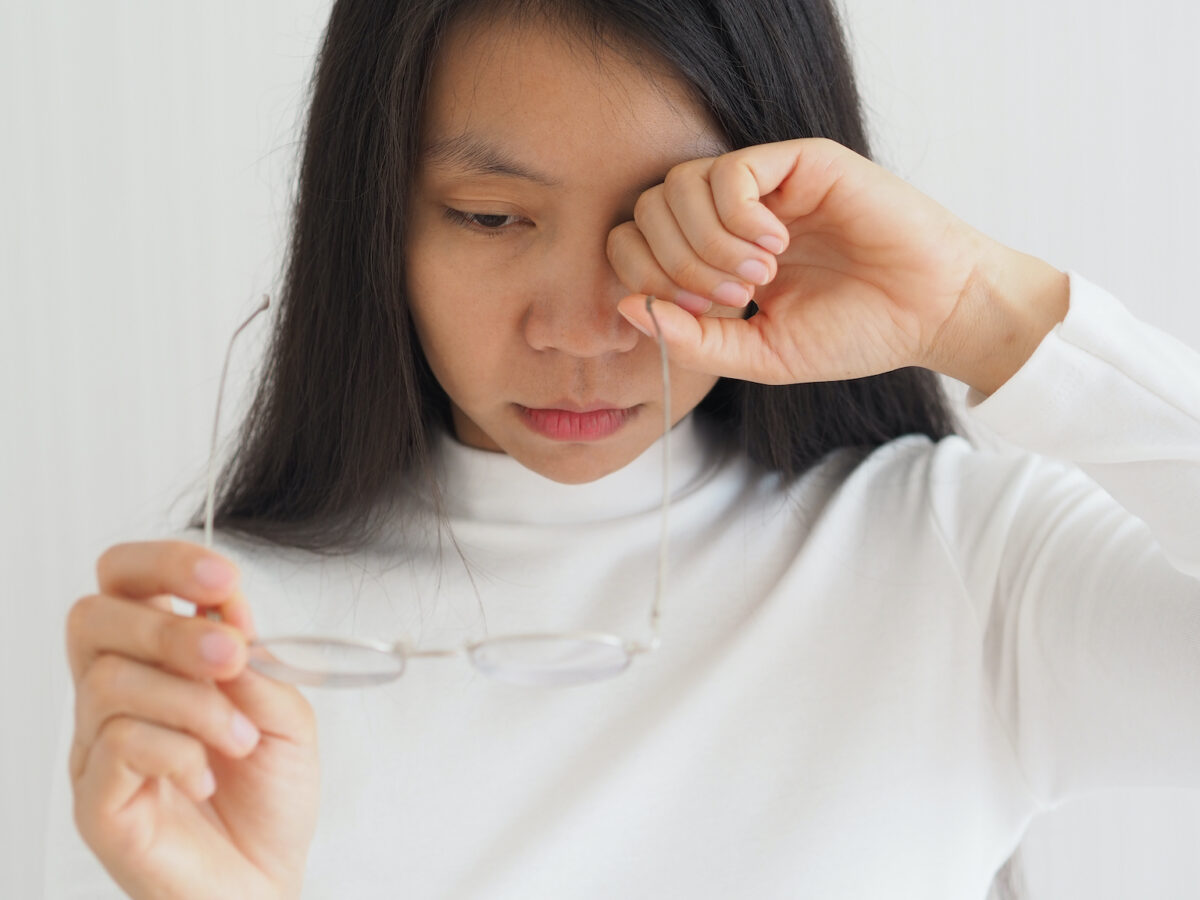 Floaters are spots that you may see in your vision from time to time. (jaojormami/Shutterstock)
Eye Health

What Are the Things Floating in Front of My Eyes?

This optical phenomenon usually isn't anything to worry about
BY Kristen Fischer TIMEApril 16, 2022 PRINT

There’s a video floating around the internet—and it’s all about floaters. As in, those funky things you sometimes see in your vision. The TED talk video got a lot of attention, highlighting questions many people who experience floaters have.

Floaters are spots that you may see in your vision from time to time. They can look like strings or may appear as black and grey specks. When you try to focus on them, they may dart off. Sometimes, they just disappear off to the side of your field of vision.

For the most part, you shouldn’t be alarmed about floaters. At the same time, it’s good to know when they may signal a more complex health issue.

Typically, eye floaters are a result of changes that occur in your eye. According to the Mayo Clinic, they occur when tiny fibers in the vitreous (the jelly-like substance in our eyes) clump up. That can create shadows on your retina, and those shadows are what people see—the floaters.

“Most of us will develop floaters as we get older,” Dr. Chirag P. Shah, an eye doctor at Ophthalmic Consultants of Boston, told The Epoch Times. “They are evident as dark or gray specks in our vision that tend to float with eye movement.

Dr. Inder Paul Singh, an eye doctor at The Eye Centers of Racine and Kenosha, told The Epoch Times that floaters typically show up when there’s a plain bright background in front of you or if it’s bright outside.

“When there is a complex background, the brain has a harder time focusing on the floaters because it is interested in so much information from the background,” Singh said. “When the pupils are dilated, such as at night time, the floaters are harder to see.”

“Typical floaters can also be larger clumps and ‘clouds’ of collagen,” he said. “If they are in the center of the visual axis (over the macula), they can decrease quality of vision.

“Since floaters can be caused by opacities in the vitreous that are small dots, strings, or large clouds, patients will often see defined darker black or gray spots or lines in their vision that will often move. Or if the opacities are large, there can be clouds or blur spots that often move in and out of the vision.”

There are different types of floaters, Shah said. Many people start developing small floaters in their 20s as the vitreous gel in their eyes starts to shrink. When we’re older, the vitreous gel often completely separates from the retina—a normal, acute process called posterior vitreous detachment.

This happens in about 60 percent of people by the age of 60. A ring-type opacity forms from where it was attached to the optic nerve, Singh said. This comes with a small risk of retinal tear or detachment.

It’s important to recognize that floaters, even if not serious, can affect daily functioning, Singh said.

“Although they do not cause structural damage to the eye if untreated, they can make it difficult to perform certain daily tasks,” he said.

For many years, the only treatment for floaters was having a surgery known as a vitrectomy. This removes the gel from the eyes. But due to high risks, the procedure is largely reserved for those with severe symptoms.

Over the past decade, laser YAG vitreolysis has gained popularity. The in-office procedure has no post-procedure restrictions.

“This can work very well for the smaller and more localized floaters,” Singh said.

The procedure can be helpful for some patients and some floater types, but it isn’t widely accepted or performed because of limited data, Shah said.

“Only a few clinical trials have evaluated this procedure,” he said. “Personally, I recommend most patients avoid vitrectomy due to the small risks, and try to adjust to their floaters.”

Seeing a ton of floaters seemingly all of a sudden? If that happens and/or if you lose peripheral vision or see flashes of light, that’s when it’s time to call your eye doctor.

“Most of the time, floaters are benign and do not reflect a serious eye health issue,” Singh said. “However, they can be a sign of a retinal tear or detachment or even inflammation.”

If floaters occur from a retinal tear or detachment, there often are multiple floaters that appear suddenly at one time, like a “shower of floaters,” he said.

“Also there may be flashing lights that are more constant and do not go away,” he said.

Another time to call your doctor is if you notice a dark curtain across your visual field, Shah said.

Kristen Fischer is a writer living in New Jersey.