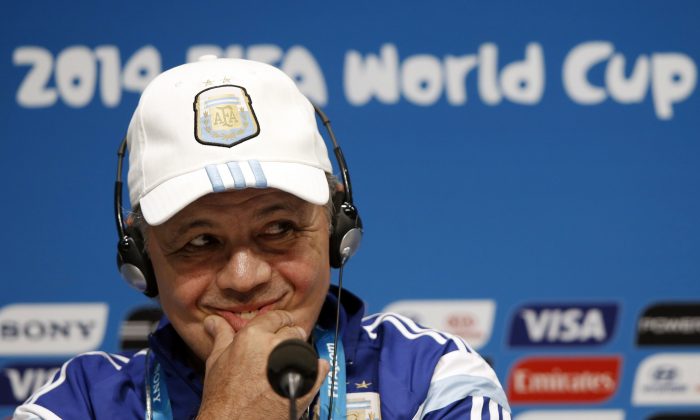 Alejandro Sabella to Retire After World Cup 2014 Final? Maybe; Argentina Coach Says He Hasn’t Spoken to Anyone About it

Larry Ong
Journalist
Larry Ong is a New York-based journalist with Epoch Times. He writes about China and Hong Kong. He is also a graduate of the National University of Singapore, where he read history.
View profile
Follow
biggersmaller
Print
Alejandro Sabella might not be retiring after the World Cup 2014 final.

On Friday, Sabella’s spokesman, Eugenio Lopez, told Buenos Aires radio La Red he thinks that “Sabella will end after the World Cup, complete the cycle and leave for another project.”

Sabella has coached Argentina since 2011.

Lopez added that Sabella would still be coach if Argentina was eliminated earlier, but now that Argentina has reached the final, “it’s better to leave while you’re up, rather than when you’re down.”

On Saturday, however, Sabella said that talk about him leaving is “irrelevant,” and that he hasn’t “talked to anyone” about his decision, “not even [his] family.”

Describing the Germans as “very powerful” physically, mentally and tactically, Sabella said Saturday that there’s no room for error.

“We must play a perfect game,” Sabella said.

Elborating on how to accomplish that, the 59-year-old coach turned poetic for a moment.

The Argentines lost one of their key players in the quarterfinals when Angel Di Maria limped off after straining his right thigh. Sabella said the Real Madrid winger’s condition was improving, but it was unclear whether he would be ready for the final.

“Today is a key day to assess his evolution,” Sabella said. “After practice I will have a better overview.”

Argentina last played in a World Cup final in 1990, when it lost to West Germany. Four years earlier, Argentina had become world champion for the second time, also in a final against the Germans.

Sabella said there are “parallels to a certain degree” between this World Cup and that of 1986, including the fact that the team to a large extent depends on a star player. Then it was Diego Maradona, now it is Lionel Messi, who has scored four goals in the tournament.

“Let’s hope the result is the same,” Sabella said.

Argentina has been trying to regain energy after its shootout win over the Netherlands on Wednesday, knowing Germany had one more day to recuperate after beating Brazil 7-1 on Tuesday.

Sabella dismissed a question about whether he would step down as Argentina coach after the match, saying the issue was “irrelevant” and that he was only thinking about the final.

Sabella’s spokesman, Eugenio Lopez, told Buenos Aires radio La Red on Friday that he thought Sabella would step down after the World Cup.

“I haven’t talked to anyone,” Sabella said of his future, “not even my family.”