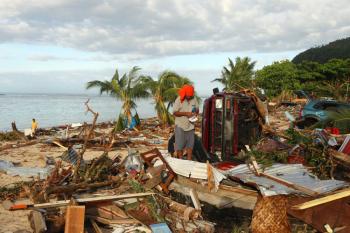 A Samoan man searches amongst the debris at the beach following an 8.3 on the Richter scale strong earthquake which struck on September 30 in Lalomanu, Samoa. (Phil Walter/Getty Images)
World

By Jasper Fakkert
Print
A day after Samoa’s Prime Minister delivered a speech at the U.N. on the dangers his country faces due to climate change, a devastating tsunami smashed into the Samoan coast killing 119 and washing away villages. The incident punctuated the vulnerability of small island states like Samoa.

In discussing how his government could mitigate the effects climate change, Prime Minister Tuila’epa Lupesoliai Sailele Malielegaoi said that relocating residents living close to vulnerable coastlines would not be possible due to high costs and the financial crisis.

Now the country faces a real disaster, not just hypothetical future ones. The powerful, 8.3 magnitude earthquake raised waves up to 20 feet high that covered the coasts of the U.S. territory of American Samoa, the independent state of Samoa and Tonga.

Ki-moon said he was “deeply saddened by the loss of life, injury and destruction of property."

In a statement on Tuesday, President Barack Obama said he is “closely monitoring these tragic events” and has declared a “swift and aggressive response."

Australia is among the countries responding to the disaster and sent medical personnel and disaster relief supplies, according to a statement from the Foreign Affairs. New Zealand also responded to the tsunami by providing medical assistance and supplies. The EU announced 150,000 euro (US$220,000) for initial emergency aid.

In his U.N. speech, Malielegao said the “Copenhagen climate pact is a must” and fighting climate change is every country's job. Copenhagen will host the U.N. Climate Change Conference in December and will discuss an agreement on international climate change.