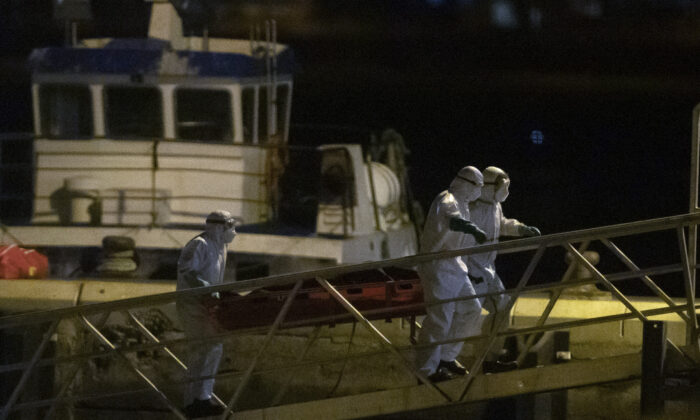 Emergency services carry dead bodies of migrants after being recovered from a wooden boat at the port of Los Cristianos in the south of Tenerife, in the Canary Island, Spain, on April 28, 2021. (Andres Gutierrez/AP Photo)
Europe

MADRID—A humanitarian aid group that monitors the plight of migrants taking perilous seaborne routes to Spain said that 21 women and one girl have died and several dozen more people were lost at sea while trying to reach the Canary Islands.

Helena Maleno, founder of nongovernmental organization Walking Borders, tweeted Thursday that 22 bodies have been recovered from a migrant boat by the Moroccan navy. She said there was one girl among the female casualties, who were mostly from the Ivory Coast and Guinea.

Spain’s maritime rescue service said it had no information on the case.

Maleno said that the boat started its journey carrying 86 people, including 36 women and 13 girls.

The Atlantic route from the west coast of Africa to Spain’s Canary Islands has become one of the most used and deadliest routes for those desperate to reach Europe.