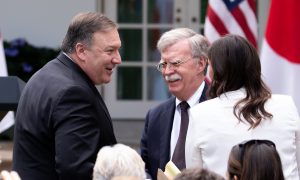 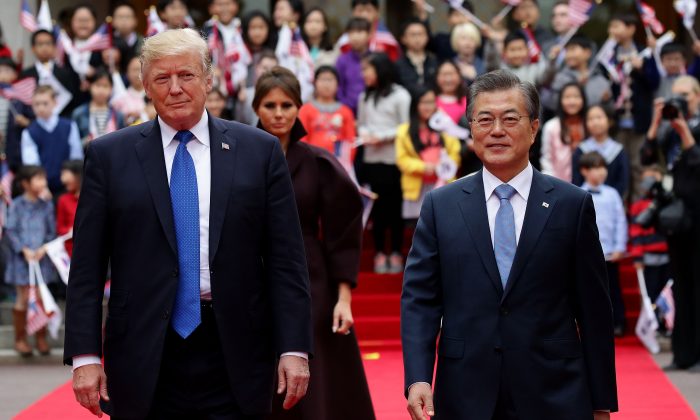 President Donald Trump and South Korean President Moon Jae-In walk towards a guard of honor during a welcoming ceremony at the presidential Blue House in Seoul on Nov. 7, 2017. (Chung Sung-Jun/Getty Images)
US News

Ahead of the highly anticipated meeting between President Donald Trump and North Korean leader Kim Jong Un, North Korean state media said the North is open to a reunification with South Korea.

The remarkable change in tone by North Korea and the upcoming summit came about following a yearlong pressure campaign by the Trump administration.

“The north and the south of Korea can improve their relations, ease the tensions on the peninsula, and make a breakthrough in achieving the independent reunification of the country,” state-controlled KCNA reported on June 9.

The state media outlet also praised the Panmunjom Declaration adopted by both Kim and South Korean president Moon Jae-in in April this year.

“The adoption of the Panmunjom Declaration is a clear manifestation of the will to usher in a new era of national reconciliation, peace, and prosperity,” KNCA reported.

The North Korean media also praised Kim for his efforts to seek peace, despite conflict having been a key component of its domestic and international propaganda for years.

“This epochal change is the precious fruition brought about by Comrade Kim Jong Un, who made a courageous decision out of his noble love for the nation and strong will to secure peace,” it said.

KNCA and other North Korean state media, which represent the official line of North Korea’s communist regime, are normally overtly hostile to the United States and its allies.

During most of Trump’s first year in office, North Korean media frequently threatened the U.S. mainland, as well as Japan, and South Korea, with a nuclear attack.

“Japan’s such rackets inciting the tension of the Korean peninsula is a suicidal deed that will bring nuclear clouds to the Japanese archipelago,” a commentary in North Korea’s state media said.

North Korea’s threat was matched by a series of ballistic and intercontinental ballistic missile (ICBM) tests, as well as an underground nuclear test in September last year.

In late November, North Korea shocked the world by launching an ICBM into space, leading Defense Secretary Jim Mattis to proclaim that the North had the ability to reach any place in the world.

After coming to office in January 2017, Trump began a pressure campaign with the intent to denuclearize North Korea.

Using a combination of diplomatic pressure, economic sanctions, and a credible military threat, Trump was able to pressure North Korea to the point where it is now. The United States increased its presence in the region by locating more military equipment there, including F-35 fighters in Japan, as well as advanced missile defense systems in South Korea and Japan. Trump was also able to secure a sharp increase in military spending, boosting America’s military capabilities.

Despite an end to the open fighting of the Korean War in 1953, a peace treaty was never signed. Hostilities between North and South Korea have remained strong over the decades.

In March 2010, a South Korean navy vessel sunk after being hit by a North Korean torpedo, killing 46 seamen. In November 2010, the North fired 170 artillery shells onto Yeonpyeong Island hitting both South Korean civilian and military targets.

During the April meeting between Kim and Moon Jae-in, however, the leaders spoke in agreement about ending the war. The meeting came after then-CIA Director and current Secretary of State Mike Pompeo met in secret with Kim in North Korea.

Pompeo went on to meet Kim in May, securing the release of three American hostages who had been held captive in North Korea.

During a visit to South Korea last November, Trump had promised North Korea a way forward, if it agrees to abandon its nuclear weapons program.

“North Korea is not the paradise your grandfather envisioned. It is a hell that no person deserves. Yet, despite every crime you have committed against God and man, you are ready to offer, and we will do that—we will offer a path to a much better future,” Trump said while addressing Kim in his speech.

“It begins with an end to the aggression of your regime, a stop to your development of ballistic missiles, and complete, verifiable, and total denuclearization,” he said.

In his speech, Trump drew a sharp distinction between an economically developed and prosperous South Korea and an impoverished North Korea.

“A sky-top view of this peninsula shows a nation of dazzling light in the South and a mass of impenetrable darkness in the North,” Trump said. “We seek a future of light, prosperity, and peace. But we are only prepared to discuss this brighter path for North Korea if its leaders cease their threats and dismantle their nuclear program.”

“What South Koreans have achieved on this peninsula is more than a victory for your nation. It is a victory for every nation that believes in the human spirit. And it is our hope that, someday soon, all of your brothers and sisters of the North will be able to enjoy the fullest of life intended by God.”

If North Korea is indeed willing to abandon its nuclear weapons program, it could be the first step toward a lasting peace and a potential reunification of the North and the South.