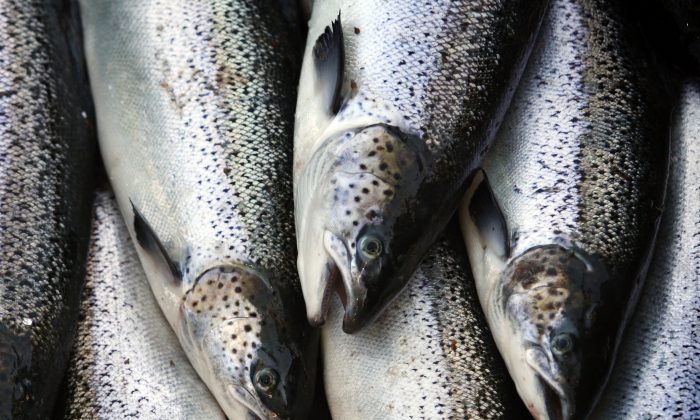 The Food and Drug Administration has approved the first genetically engineered animal in the United States–a new type of Atlantic salmon.

In a statement, the agency said it has determined through “an exhaustive and rigorous scientific review” that the AquAdvantage salmon “is as safe to eat as any non-genetically engineered (GE) Atlantic salmon, and also as nutritious.”

The agency said it reviewed data from the manufacturer, AquaBounty Technologies, and other peer-reviewed data, and came to the conclusion that the inserted genes remain stable over multiple generations of fish, that the food is safe to eat by humans and animals, and that the genetic engineering is safe for the fish.

It also said there won’t be a significant environmental impact in the U.S. “because the multiple containment measures the company will use in the land-based facilities in Panama and Canada make it extremely unlikely that the fish could escape and establish themselves in the wild.”

The salmon has been genetically engineered to grow twice as fast as regular salmon by inserting genes from Chinook salmon and ocean pout.

No labeling stating the salmon is GE will be required, because of its determined safety and nutritional equivalent to non-GE salmon, the agency said on its website. However, Alaska will require labeling because of its status as a top wild salmon producer.

Critics are not pleased that the “frankenfish” has been approved, though.

“There’s no place on our dinner plates for genetically engineered fish. We will continue to work to ensure the market, from grocery retailers to restaurants, continues to listen to majority of consumers that don’t want to eat this poorly studied, unlabeled genetically engineered fish,” said Lisa Archer, Food and Technology program director at Friends of the Earth, in a statement.

The organization says more than 60 grocery store chains, including Safeway, Kroger, Trader Joe’s, and Whole Foods, have committed to not selling the GE salmon.

Wenonah Hauter of EcoWatch added that there was “insufficient safety testing” done.

“The FDA is supposed to protect public safety, yet the agency’s environmental review was done in the form of an environmental assessment instead of a more thorough environmental impact statement that would fully consider the threat this controversial new fish could pose to wild fish populations and ecosystems,” she said.

“Canadian researchers found that GMO salmon readily breed with a different species of fish, a potential risk that FDA never addressed in its risk assessment.”

AquaBounty, meanwhile, is happy about the approval.

“AquAdvantage Salmon is a game-changer that brings healthy and nutritious food to consumers in an environmentally responsible manner without damaging the ocean and other marine habitats. Using land-based aquaculture systems, this rich source of protein and other nutrients can be farmed close to major consumer markets in a more sustainable manner,” said Ronald L. Stotish, Ph.D., Chief Executive Officer of AquaBounty in a statement.

Some scientists are also supportive of the project.

“I view the announcement of the FDA to approve the AquaBounty GE salmon for production in land based system as a huge win-win for the environment, consumers, and the process!” William Muir, an animal genetics professor at Purdue University, told Genetic Expert News Service. “The scientific review is clear, there is no credible evidence that these fish are a risk to either human health or the environment.”