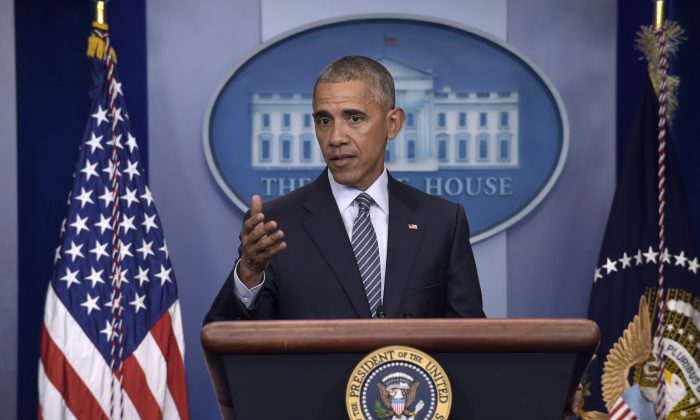 President Barack Obama during a news conference in the Brady press briefing room at the White House in Washington on Nov. 14, 2016. (AP Photo/Susan Walsh)
Politics

Vouching for the successor he never imagined having, President Barack Obama on Monday said the United States under Donald Trump would remain the “indispensable nation” for global security and praised the president-elect for vowing to maintain America’s alliances.

“There is no weakening of resolve,” Obama said before departing on a three-nation trip that was supposed to be his grand valedictory tour.

Instead, he will now confront concerns about a Trump presidency in Europe and Latin America and have to reassure nations about a man who Obama only a week ago derided as “woefully unprepared for the job” who “can’t handle the nuclear codes.”

Obama Says Democrats Need to Regroup and ‘Show Up Everywhere’

“There is enormous continuity … that makes us that indispensable nation when it comes to maintaining order around the world,” Obama said at a news conference at the White House. Relationships and policies go beyond presidents, he said, adding that military officials, diplomats and intelligence officers would cooperate with their foreign counterparts as before.

During his meeting with Trump, Obama said Trump “expressed a great interest in maintaining our core strategic relationships,” including “strong and robust NATO” partnerships.

Even as he visits Germany, Greece and Peru, Obama said his team would accelerate efforts to ensure a smooth transition to the Trump administration.

He stressed that he would try to strengthen the American economy over his final two months, so that “when we turn over the keys, the car’s in pretty good shape.