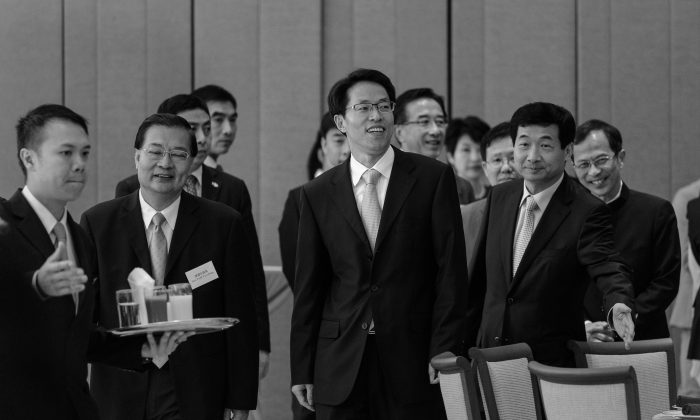 After Hong Kong’s Leader Is Cast Aside, Beijing Guns for Liaison Office Chief

When faced with reporters after Hongkongers occupied major roads in 2014 to protest the Chinese legislature’s refusal to advance democratic reform in China, Zhang Xiaoming, the top Chinese regime official in Hong Kong, smiled and said: “The sun still rises.”

No big deal, Zhang seemed to have suggested. Beijing has the final say over the affairs of semi-autonomous Hong Kong, not the city’s people.

Recently, however, China Liaison Office director Zhang Xiaoming’s comment from two years ago has been used against him, suggesting that he may also be subject to sudden power from on-high.

“Little Ming goes missing, but the sun still rises,” wrote Sing Pao, a pro-Beijing, Hong Kong newspaper, in the headline of a hit piece against Zhang. Zhang, Sing Pao reported, had failed to attend a local crafts exhibition that he opens each year with Hong Kong leader Leung Chun-ying. Given that Leung, a very unpopular figure and ally of Zhang, recently announced that he wouldn’t be seeking re-election next year, “it won’t be long” before Zhang is ousted as Liaison Office chief, Sing Pao wrote.

Sing Pao’s assessment of Zhang Xiaoming is no idle statement. Last month, this newspaper obtained exclusive information from a high-level source that the Xi Jinping leadership had planned to transfer Zhang out of the Liaison Office in November, but wasn’t able to owing to circumstances at the time.

Zhang has made several controversial remarks as the top Chinese official in Hong Kong. Apart from his “sun still rises” remark, Zhang once claimed that Hong Kong leader Leung Chun-ying has “superior power” over the city’s legislative and judicial branches. Most recently, Zhang cautioned advocates of “Hong Kong independence,” and has even suggested that Hong Kong schools reconsider implementing “patriotic education,” a school syllabus that Hongkongers say is communist indoctrination.

This November, an individual close to discussions in Zhongnanhai, the headquarters and residence of the top Chinese leadership, told Epoch Times that the Xi Jinping administration is dissatisfied with how Jiang’s associates in Hong Kong keep “messing up” the city, and had planned to sideline Leung Chun-ying and Zhang Xiaoming.

Leung has since announced that he won’t be running for a second term in office, a move which confirms an earlier Epoch Times report with exclusive information about how Leung had lost favor with Beijing, and could even be punished.

As for Zhang, the Xi leadership had planned for some time to transfer him out, but couldn’t find any equivalent office to do a reshuffle (the director of the Liaison Office is a ministerial-level position), according to Epoch Times’s source. Besides, “no department is willing to take in” Zhang because he is known to be “incompetent,” but is good at “playing power games” and “stirring up trouble.”

Zhang was supposed to be shunted out to the All-China Federation of Returned Overseas Chinese this November to replace director Lin Jun, who is 67 this year and due to retire, said the source.

But then a scandal erupted in Hong Kong over the manner in which pro-Hong Kong independence activists took their oaths to be sworn into the Legislative Assembly. According to the source, Zhang Xiaoming exploited the “current administration being limited by the Chinese regime’s rotten system” to take harsh action against the activists, and justify his staying on as Liaison Office head.

In early November, the Chinese legislature issued a controversial legal interpretation that sought to bar two pro-independence activists from taking office due to their use of coarse language in their oaths of office. Zhang has made several strong statements on this issue, and also condemned “Hong Kong independence,” a political position that few Hongkongers seriously entertain.

The source, however, says that Zhang “will definitely find self-preservation difficult” because Xi Jinping has accelerated the clean-up of Jiang Zemin’s influence in Hong Kong since Xi took on the prestigious mantle of Communist Party “core” leader in October.

Indeed, if Zhang Xiaoming isn’t moved on, he could possibly be held responsible for other improper conduct.

A source close to the Liaison Office told Epoch Times that Zhang and Song Lin, the recently disgraced chairman of state-owned giant China Resources (Huaran), frequently host high-ranking Chinese officials at the China Resources Headquarters building in Shenzhen, the Chinese city bordering Hong Kong. The source added that the amount spent on liquor alone at those events is well over 16 million yuan, or about $2 million.

During a key political conclave in October, the Chinese leadership sanctioned two documents that require elite Party cadres to “normalize their political life.” Xi Jinping and anti-corruption chief Wang Qishan have also stressed the need for “strictly governing the Party” on several occasions this year.

From this August, Hong Kong newspaper Sing Pao started running frontpage commentaries that are very critical of Zhang Xiaoming, Leung Chun-ying, elite Politburo Standing Committee member Zhang Dejiang (who is Hong Kong’s top overseer and chief of the Chinese legislature), and most recently, former vice premier Zeng Qinghong. Sing Pao claims that these men “brought calamity to Hong Kong,” and suggested that they managed to keep their offices because their political patron is Jiang Zemin.

Sing Pao’s move is highly irregular because it is staunchly pro-Beijing, and analysts believe that the newspaper is now carrying messages from Xi Jinping’s camp.

In October, the leadership of the Hong Kong and Macau Affairs Office was criticized by the Party’s anti-corruption agency for a lack of discipline, and for not strictly following instructions from Party Central.

Epoch Times also received high-level information this November that Xi Jinping has created a special inquiry group that will investigate Hong Kong officials and businessmen who bought their way into the Chinese regime’s advisory body.

With reporting by Li Ling-pu.