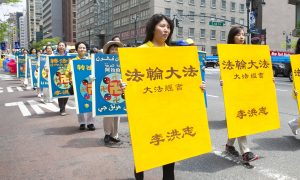 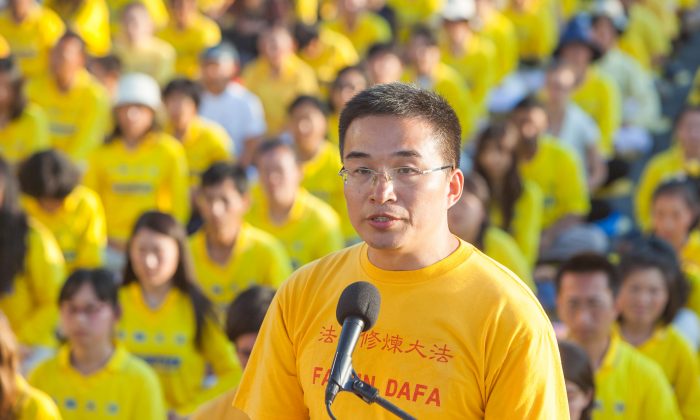 After 15 Years of Persecution, a Victim Still Advocates

NEW YORK—Despite the late hour, the sun was still powerful on Sunday evening, when Qin Peng held a banner for all his fellows who haven’t made it. Standing across the street from the Chinese Consulate in New York with about a hundred others, his message was simple, “We came here to ask the Chinese Government to stop the persecution of Falun Gong.”

July 20 has a special significance for practitioners of Falun Gong (also known as Falun Dafa), a practice of slow-moving exercises that teaches truthfulness, compassion, and tolerance. It has been 15 years since the Chinese Communist Party declared that the practice must be eliminated, destroying millions of lives in the process.

Qin, 41, learned about Falun Gong, in 1995. After years of searching for a method to “improve my spirit,” as he put it. He felt Falun Gong enabled him to do just that. “Even the government encouraged people to practice it,” he said. By 1999 Chinese media touted some 100 million practiced Falun Gong.

But then, on July 20, 1999, the Communist Party leader at the time, Jiang Zemin, came with new rhetoric. Seeing the practice’s followers beating the Party’s membership almost two to one, he said Falun Gong contends with the Party for ideological control and should be swiftly eradicated.

All media across China followed the Party line publishing thousands of articles and reports slandering Falun Gong. Simultaneously, massive waves of arrests started to fill the prison and labor camp system. And so, on the New Year’s Eve of 2001 police came to Qin’s apartment. He was arrested for practicing Falun Gong.

He spent almost the entire next five years in jails and labor camps, suffering multiple forms of torture, including severe beatings, electric shocks, and sleep deprivation.

In May 2014, he was able to come to the United States on a tourist visa. “Maybe I will have to apply for [political asylum],” he said with a gentle smile.

However shocking, Qin’s story is hardly isolated. Over the years he saw many of his friends beaten to death. He remembered Xin Zhao, a lecturer at Beijing Technology and Business University. She was arrested practicing Falun Gong exercises in a Beijing park. Half a year later, she was dead.

Xin’s death is detailed on the Minghui.org website run by overseas Falun Gong practitioners. The website lists more than 3,000 accounts of killings through the persecution. Several investigations by overseas advocates estimate at least 40,000 were killed, their organs seized and sold for transplants.

Qin remembered, back in 2001, when the police arrested him, forced him into a car, and blindfolded him, he made himself cry out, “Falun Dafa is good.” Fifteen years later and thousands miles away, it seems his conviction hasn’t changed a bit.