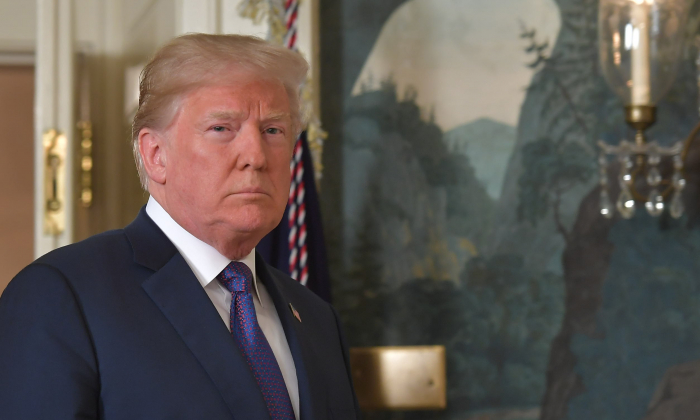 President Donald Trump arrives to address the nation on the situation in Syria at the White House in Washington on April 13, 2018. (Mandel Ngan/AFP/Getty Images)
Trump Administration

After Clobbering Amazon and USPS, Trump Moves to Fix Loopholes

President Donald Trump turned his criticism of Amazon.com and the U.S. Postal Service (USPS) to action on April 12 and ordered the formation of a task force to examine the mail carrier’s operations and finances.

The president’s executive order doesn’t mention Amazon but does direct the task force to examine parts of the USPS business operations that could directly impact the e-commerce giant’s bottom line. The task force is ordered to prepare a report no later than Aug. 10 this year, with recommendations for reform.

Trump has long criticized Amazon because it takes advantage of USPS’s below-market package delivery rates. A 2017 report by Citigroup (pdf) found that the USPS pricing model was unsustainable. If the model was adjusted to market rates, Amazon’s delivery costs would go up by $1.46 per package.

“I have stated my concerns with Amazon long before the Election,” Trump tweeted on March 29. “Unlike others, they pay little or no taxes to state & local governments, use our Postal System as their Delivery Boy (causing tremendous loss to the U.S.), and are putting many thousands of retailers out of business!”

Under the current arrangement with China, USPS ships packages arriving from China at American ports for a quarter of the market rate. Chinese merchants are aggressively taking advantage of the discount and are flooding the U.S. market with knockoffs at surreal prices with shipping included, like $0.20 iPhone cables and $1.78 4GB memory sticks.

The USPS has lost $65 billion since the 2007–2009 recession and is unable to pay retiree health benefits. The Government Accountability Office (GAO) has considered the USPS a high risk every year since 2009.

“The USPS is on an unsustainable financial path and must be restructured to prevent a taxpayer-funded bailout,” Trump wrote in the executive order.

The president has also criticized Amazon for failing to pay state and local taxes. Amazon has shored up the practice by starting to charge taxes on goods it sells directly, but third-party merchants, who make up half of Amazon’s order volume, still don’t charge taxes.

“There’s no question that Amazon is capable of collecting these taxes,” said Carl Davis, research director at the Institute on Taxation and Economic Policy, a nonprofit research organization. “It’s just not doing so. And the result is a price advantage over other businesses.”