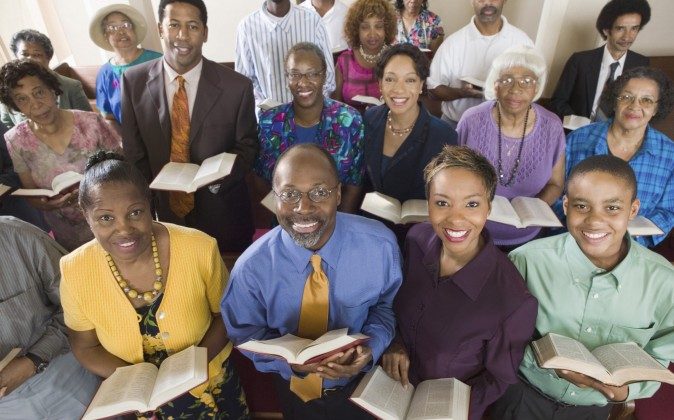 The social support afforded by going church improved the self-rated and physical health of some African Americans, according to a study that examined the congregations of 74 Methodist Episcopal churches in South Carolina. (IPGGutenbergUKLtd/photos.com)
Health News

African-Americans’ Concept of Health May Be More Than Physical

Researchers suggest that social support afforded by church and differing perceptions of health status may explain the discrepancy in self-rated and physical health among African-Americans.

Self-rated health—or a person’s perception of their own health—has been shown to be a strong predictor of illness and even death. A new study in the journal Ethnicity and Disease finds that African-Americans with poorer self-rated health tend to be overweight or obese, engage in less physical activity, and have poorer diets.

But another, unexpected finding is that many African-Americans with serious chronic health problems rate their health as good or even excellent.

“Self-rated health hasn’t been studied very much in African Americans,” lead study author Meghan Baruth, Ph.D., of the University of South Carolina explained. “We wanted to see what factors—both disease-related and people’s behaviors—are associated with self-rated health in this population,” she says.

Baruth’s study analyzed data from over 1,200 participants in the Faith, Activity and Nutrition program, a 15-month program that promoted healthy behaviors such as physical exercise and healthy eating choices in 74 African Methodist Episcopal churches in South Carolina.

Baruth found that African-Americans who rated their health highly were less likely to have diabetes, hypertension, high cholesterol, arthritis, or obesity. Participants with higher self-rated health were also more likely to be physically active and to eat less fat and more fiber. They also reported lower levels of stress.

Surprisingly, many participants still rated their health highly despite having a high number of chronic health conditions. “A lot of people had hypertension and obesity, and they really didn’t engage in healthy behaviors, but they still rated their own health as good to excellent,” Baruth says.

Winston Wong, M.D., director of Disparities Improvement and Quality Initiatives at Kaiser Permanente, who is not associated with the study, suggested that this unexpected finding might also reflect what’s considered “healthy” in the African-American community.

Since the norm for “average” health might include many people with serious chronic conditions, study participants who rated their health as “poor” may have an especially pronounced risk of poor health outcomes, he explained.

Nevertheless, the study suggests, “The importance of emotional, psychological and spiritual health … can have as much relevance to individuals as physiologic measures of health or the diagnosis of a medical condition,” Wong said.